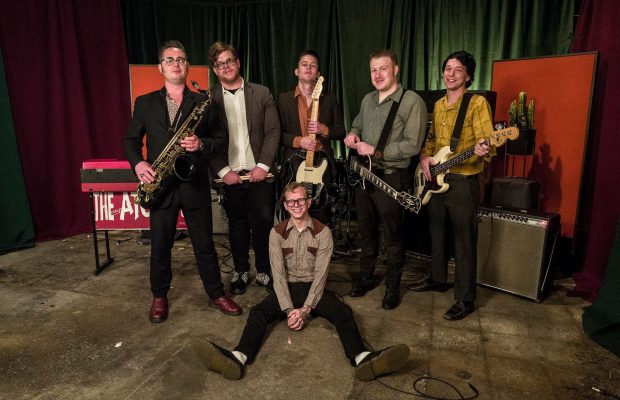 Started in 2008 and going strong over a decade later, California punk band The Atom Age is set to release their new album Cry ‘Til You Die on August 23rd.  Comprised of Ryan Perras (vocals/guitar), Peter Niven (vocals/guitar), Brendan Frye (saxophone), John Murgueitio (organ) and Matt Diamant (drums), the group derives their inspiration from the crazed energy of 50’s and 60’s era garage/punk and R&B and count as influences bands such as The Sonics, Rocket From The Crypt, Hot Snakes, Link Wray and Fugazi.  Having toured constantly for the the first few years as a band, they released two albums during that time and worked to evolve their sound.  In 2014 the band took a break, adding an organist to the band and started working on their critically acclaimed 2015 album Hot Shame.  Working with producer Blag Dahlia from iconic punk band The Dwarves, the band was able to use his guidance to steer their sound in the right direction.  Their past three albums have showed their growth as songwriters but something was always missing with regards to tracking and layering.  With Cry ‘Til You Die, the band worked with producer Chris Schiffman (The Bronx/PUP/Jimmy Eat World) who captures perfectly the energy of their live shows on record.  The band recently released their latest single, along with the accompanying video, for “Never Looking”.  You can watch the video below. Staff writer Emily May recently spoke via email with Ryan Perras about the new album, the new video and what’s next.  You can follow The Atom Age and stay up-to-date with all band, album and tour news, as well as stream and purchase their albums, via the following links:

You guys just released your latest video for “Never Looking”.  What can you tell me about the making of the video and your decision to film it during a blizzard while on tour?

We made no decision! Denver blasted us with a blizzard on the tour that night and we already had filming all set up, so all we could do was embrace it and make it fun. The show actually turned out great too, nothing will stop Denver people from coming out.

You will be releasing your new album Cry ‘Til You Die on August 23rd.  What was the writing and recording process like for the album?

It was started a couple years back, we demoed everything heavily and took all the songs out on the road to try them out live before recording. We recorded the whole thing in less than a week at my studio District Recording with Dave Schiffman at the helm.

Your previous album Hot Shame took a while to record, as you spent some time refining the sound of the band.  The album was co-produced by Blag Dahlia of The Dwarves, whom you’ve said helped to steer the album’s sound in the right direction.  What led you to want to refine your sound with Hot Shame and how do you feel that Cry ‘Til You Die compares?  You also said that he gave you great songwriting advice.  What advice did he give you?

We wanted to evolve as a band and had just added the farfisa organ which brought a whole new layer to our sound. I think we tried to integrate it the best we could and spent a lot of time tweaking stuff.  Cry ‘Til You Die is the best work we’ve ever done. It’s a logical evolution but to us it’s night and day from Hot Shame.  Blag is a killer songwriter, just listen to what he’s done. He would help us during the demo process, making sure the arrangements were solid and the hooks were all there.

I read that in the past, capturing the energy of the band on record has proved to be a challenge and that over the past 3 albums something has been lost in the equation of tracking and layering.  What was it about working with producer David Shiffman that helped you to capture that missing energy on the new album?

I’m an audio engineer so I always suffered from losing perspective and diving down the rabbit hole when recording my own records. Bringing Schiffman in allowed us to take a step back and listen to someone very experienced that was outside the fold. He insisted that we tour on the new songs and try them out every night. It was invaluable because we found out what worked really quickly. By the time we were ready to record we just slammed the tunes out. It was simple….like recording should be for this band. I wasn’t able to capture what I should have for the first albums because I was too close. Schiffman understood our energy and made it happen.

What was the inspiration behind the album artwork?  How did you meet and come to work with Robin Eisenburg who did the design?

Our guitar played and main vocalist Peter had an idea to call the album “Cry ‘Til You Die” and wanted to use a Robin Eisenberg image he saw. I told him we can use that title if you can get permission to use the image, thinking she would never even respond. Well, we sent her the record, she wrote back and was like I dig this, yeah sure you can use it. We were pretty dumbstruck!

The song “It’s A Mess” from your album Hot Shame was featured on The Ranger movie soundtrack.  How did that opportunity come about?

Our friend, longtime supporter, and promoter Middagh Goodwin was somehow asked to put together the soundtrack and asked us. It’s pretty cool because everything is like old school 80s punk with us thrown in the middle. I like the juxtaposition.

You started the band in 2009. What kinds of changes have you seen in the industry and music scene over the years?  Have you found the increased connection between streaming and social media with music to be a challenge or has it helped you as a band?

The biggest change we’ve noticed is social media monetizing everything. You could reach a lot of people into your band online for free and now they’ve made it so you have to pay. Streaming is definitely something you have to deal with and integrate.  What a headache.

You mentioned in an interview a few years back that the state of punk rock at that time was depressing.  Do you feel that things have gotten better in recent years?  Are there any new punk rock bands on the scene right now that you are excited about?

I do think things have gotten a bit better. I think there’s a lot of cool bands thinking a little outside the box again. I think IDLES is a really exciting band and a couple Bay Area bands like Nobody’s Baby and Grumpster.

What do you think made the ’50s and ’60s such an exciting time for music?  What is it about music from that era that inspires you?

It was just a new frontier, everything was new, people were willing to try stuff, and it was first and foremost really fun. It was just a time in music where the spirit was really great and Rock ‘N’ Roll seemed important. Everything from that time inspires me.

Cry ‘Til You Die is your first new music since Hot Shame?  What have you been up to since that album was released?  Did you spend that time writing the new album?

Yeah we tour a lot, then usually take forever writing, recording, and getting set up to release a new record.

I’m a recording engineer and run my own studio in San Jose, CA so I’m always busy making records with bands.  It’s a lot of fun and keeps me in the loop.  The other guys stay busy with music as well, teaching, playing, learning drums.

What can you tell me about having the support of Mike Park and his label Asian Man Records since starting out as a band?  I read that you have somewhat parted ways recently due to your sound not really meshing with the other bands on the roster.  What role does the label have with the band currently and what are your plans going forward?

It was awesome!  He took us under his wing very early on and taught us a lot.  There’s a real community surrounding his label and it’s always been a pleasure and privilege to be a part of it.  With “Cry ‘Til You Die”, we all decided it was best for him to back us and have us release it under our own vanity label called Tiger Dream.  It affords us a little more flexibility while allowing us our own little stamp.

Touring and a new EP out in late fall/early winter.  Thanks so much!