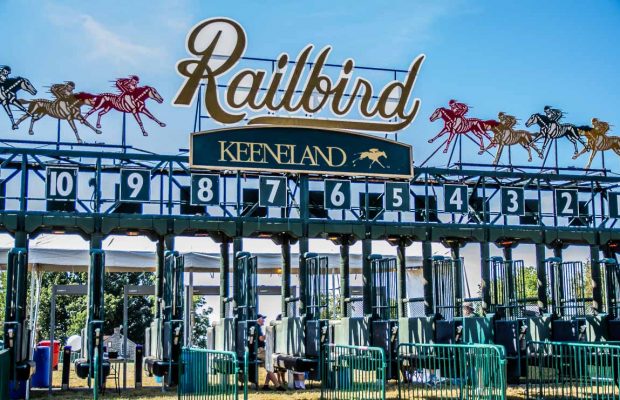 Although Kentucky is known for many things including Bourbon and basketball, a big tourism draw to our state every year is horse racing, a sport that has drawn thousands of tourists to Kentucky in previous years.  This year saw the inaugural Railbird Festival at Keeneland in Lexington, KY, the popular racetrack and a site that also hosted the 2015 Breeder’s Cup.  With rolling hills and plenty of open space to set up the festival, it was the perfect spot to host and featured a great introduction to the city for those who were visiting for the first time.  The festival drew thousands upon thousands of visitors who were eager to catch the line up that included Brandi Carlisle, Old Crow Medicine Show, Tyler Childers, Lucinda Williams, Gary Clark Jr, Mavis Staples and The Raconteurs and Hozier, who headlined the festival on Saturday and Sunday night, respectively.

With racing gates that doubled as entry gates to the festival, hometown pride was shining bright as soon as the gates opened and festival goers walked onto the festival grounds.  With local food vendors, local beer and local bourbon present this weekend, Kentucky pride was on display. There were three stages on the grounds- The Limestone Stage, The Burl Stage and The Elkhorn Stage.  The layout of the festival was very well-done, with the Limestone Stage, where a lot of the main acts and headliners performed, right near the entrance/exit.  The Burl Stage, where many of the more indie and local acts performed, was centrally located near the food vendors by the center of the site.  The Elkhorn Stage was down a rolling hill at the opposite side of the grounds as The Limestone Stage, and afforded a beautiful view of the sunset, stage and crowd from the top of the hill.

Each day of the Festival was jam packed with musical highlights.  The legendary Mavis Staples drew a hefty crowd on Saturday, telling the crowd she was there to give everyone a good time and to make them feel good.  There is no doubt she accomplished that goal!  Iconic performer Robert Earl Keen gave a great performance, as well, to the sea of people who caught his set.  Low Cut Connie gave what was perhaps the most energetic performance of Day 1, with singer/pianist Adam Weiner a true showman.  From standing on his piano, jumping off of it, to dancing around with his shirt off, the band definitely kept the crowd cheering and having fun!  Beloved artist Brandi Carlisle rocked the Limestone Stage on Saturday evening, with the golden rays of sunshine illuminating the stage and the crowd, all of which was singing along to hits such as “The Story” and “Wherever Is You Heart”.  American favorites Old Crow Medicine Show rocked the Elkhorn Stage with the high energy stage show they are famous for, giving the crowd a fun and rowdy show.  Closing out Day 1 was the incredibly popular Jack White fronted band The Raconteurs.  Awash in moody lighting of greens, yellows and reds, the band rocked the crowd and was the perfect ending to Day 1.

Day 2 saw a bit of a slower start, with many of the festival-goers from the day before a bit hungover and exhausted from the previous day’s festivities.  That didn’t dampen their fun for long though, as Sunday hosted a fun line up with Athens, GA country rock band Futurebirds amongst the early bands to get the day going.  Their upbeat stage show had the crowd on their feet in no time!  Kentucky native Kelsey Waldon, who has been making a name for herself over the years, serenaded the crowd with her country/roots/soul music.  Waldon, who recently signed to John Prine’s record label, has a very classic sound to her music, reminiscent of classic country artists like Loretta Lynn.  Lexington garage rock band Johnny Conqueroo owned The Burl Stage, with their high-energy hometown set fueling both the band and their fans.  Guitar virtuoso Gary Clark Jr absolutely floored the crowd at The Limestone Stage this evening with his guitar solos and vocal delivery, proving why he one of the great blues musicians/guitarists of our time.  Closing out the Elkhorn Stage this evening was Kentucky’s best kept secret, Tyler Childers.  Having gained critical acclaim and a fast growing fanbase, judging by the fact that every festival attendee appeared to be watching his set, Childers is fast becoming known outside of Kentucky’s borders as he enters the national stage.  He had the crowd cheering and singing and in high spirits.  So beloved is Childers to the city of Lexington that he was given the key to the city before the band started their set!  The popular Irish artist Hozier closed out the festival for Day 2 at The Limestone Stage with his soulful sounds and fun stage show.   Railbird Festival seemed to be a smash hit for it’s first year, with great attendance, vendors and overall festival vibe.  I can only hope it was enough of a success to come back next year, even bigger and better than before!  You can follow Railbird Festival via the following links: