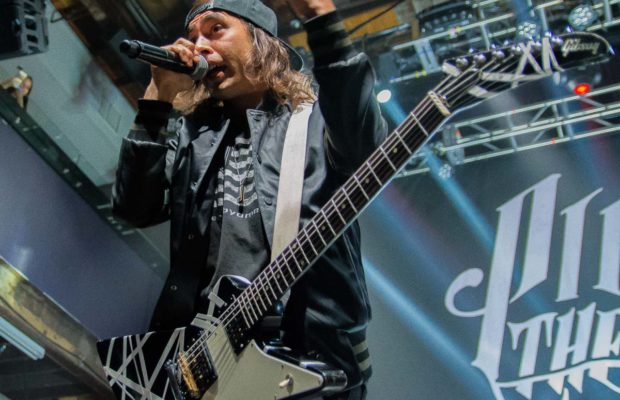 Louisville, Ky is host to Louder Than Life Festival, which was on Saturday, September 30th and Sunday, November 1st of this year.  Performing a post-festival late night show on Saturday night was California post-hardcore band Pierce The Veil.  They are currently on tour with Rise Against, who were in town to perform at the Louder Than Life Festival.  As I arrived at the venue, it was apparent that many of the fans had arrived early for the chance to stand at the barricade.  Pierce The Veil has a very passionate and devoted fan base who created a wonderful and positive energy throughout the venue.  Although the show was late, spirits were high.  Many in the crowd had been at the festival earlier in the day and were ready to keep that momentum going late into the evening.  As the lights dimmed, signaling that the band was about to come out onto the stage, the crowd began cheering.  The guys started with their hit Bulls In The Bronx, giving the fans a fun and energetic set, with plenty of jumps, leg kicks and crowd interaction.  The stage was set up with a drum platform towards the back of the stage and three platforms along the front of the stage, on which Vic, Tony and Jaime took turns performing.  It is apparent that these guys love to perform for their fans, frequently walking to the edge of the stage to perform directly to them.  The band was in high spirits, feeding off of the energy of the crowd, who were singing along to every song as loudly as they could.  Vic mentioned that it reminded him of home.

Towards the end of their set, Vic pulled out his ebow, which is a device that, when held up to one’s guitar strings, makes the guitar sound like a violin.  He mentioned how he had seen a Pearl Jam documentary when he was younger in which they had used one and how he loved the way it sounded.  He’s used one on every album since.  They then performed, for the first time live, their acoustic cover of Green Day’s hit “Coming Clean” from the album Dookie, with Vic mentioning how much he loved Green Day and that album.  The guys ended their set with Caraphernelia and Circles, exciting the stage to a roar of applause, cheers and chants of “one more song”.  After a couple of minutes, the band came back out for two more songs, performing Dive In and King For A Day.  The band let the fans pick what song they wanted to hear last, with the unanimous vote being for King For A Day.  The band then asked the crowd if they had ever moshed at 1 am?  Once the last song was over, Vic, Tony, Jaime and Mike all stood on their platforms to take a bow, with Jaime throwing his bass up into the air and catching it and Tony swirling his bass around his body!  Jaime then took the opportunity to stand at the barricade, bowing his waist over it to reach into the crowd to shake hands with and hug the fans who were gathered up front, while Mike passed out drum sticks, all of which added to the excitement of the evening.  Pierce the Veil are an incredibly fun, passionate and energetic live band.  They left their fans buzzing with the excitement of an incredible night of singing along with their favorite band!  Louisville band Light Treasons opened the show.

Dive In
King For A Day