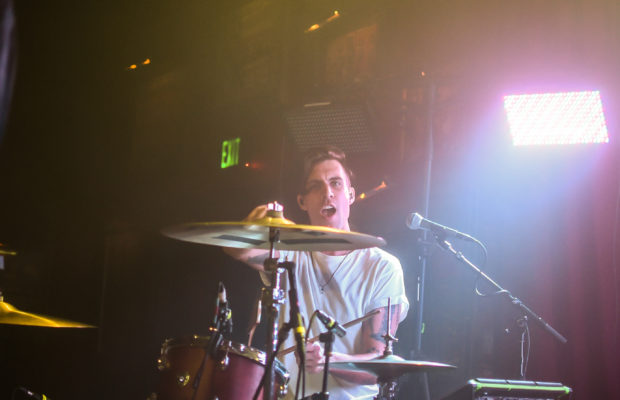 Words and Photos by Sarah Lozano

It was a rainy week for Houston, Texas. Our Fourth of July wasn’t the pool party fueled barbeque of the rest of America. It was also a busy weekend for the city. Between Van’s Warped Tour and k-pop band GOT7 making a stop in town, Young Rising Sons had some competition for their Sunday night performance at House of Blues.

The show wasn’t big in number but the energy was there. The New Jersey trio was opened by a Houston trio, Camera Cult. Consisting of members Ricky J. Vasquez, David Gonzalez, and Skyler Scholtes Camera Cult’s an electric-pop band signed to local indie label Wormhole label and I’m looking forward to seeing again. After hours of binging GLOW seasons 2 before heading to the show, I can expertly say that Camera Cult’s music belongs straight out of the eighties slow dance scene. There latest single “Location” has been stuck in my head for days now.

Young Rising Sons hit the stage next. It was my first time seeing. Their fans were pretty excited to see them and they were very thankful for their very loyal fans who ventured the rain to see them on day where so many other events were going on. The band who has opened up for acts such as Halsey and The 1975 turned the crowd into a dance floor. With teenage best friends dancing along to upbeat songs like “King of the World” and “Turnin’”. My personal favorite was a new single “+Noise-” which beautifully blends has more of an R&B vibe which works so perfectly with lead singer Andy Tongren’s soulful vocals, this could be a sign of a new direction that the band could go in.