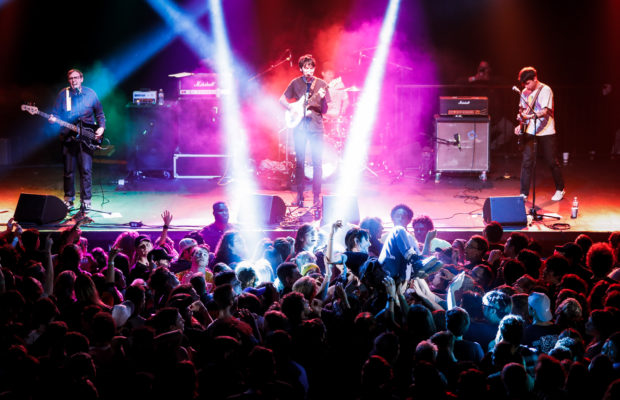 Joyce Manor for me was the band that I had no clue about, but went to see because my friend didn’t want to go. Flash forward a year later, and some serious YouTube binging, Joyce Manor has earned a spot in my playlist.

This tour featured Joyce Manor as the headliner with supporting acts Jeff Rosenstock and Remember Sports. The band, Remember Sports, opened up with a great set and a sound that I’d have to say is a strong mix of indie vocals with a punk sound. Next on stage came Jeff Rosenstock, and I have to say.. we LOVE a band that cares. Namesake and guitarist, Jeff Rosenstock, took his tuning break as a time to speak out on the very real issue of sexual assaults at shows.

“If you’re someone who thinks sexual assault is okay.. fucking leave. Leave my show.”

He went on to say how more bands need to be aware that these things happen at shows and how it needs to stop being something people are afraid to talk about. You can check out both openers bandcamp’s here (Remember Sports) and here (Jeff Rosenstock).
When Joyce Manor came on the room was quiet, and within the first 30 seconds fans were rushing the barricade. The venue security had their hands full with 5 or 6 crowd-surfers going at once toward the stage. I was perfectly content watching the madness from the balcony over head and it was cool to see the crowd from the different point of view. Hundreds of people screaming and dancing, just having the time of their lives. I can only imagine how cool it must have been from the bands point of view.
Joyce Manor frontman, Barry Johnson, took the opportunity to say:
“Best crowd of the tour, I’ll take any opportunity to talk shit, but I love you Orlando!”
If you’re interested in seeing Joyce Manor they are on tour currently in Australia and the UK and for US fans you can keep an eye out for any new tour postings at https://joyce-manor.com/tour/ .