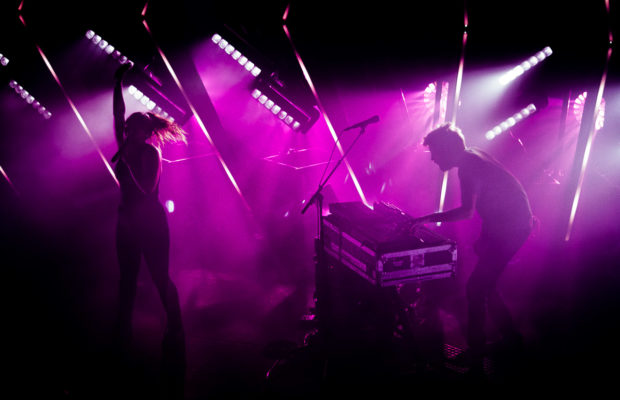 Indie Pop duo Sylvan Esso, who are currently touring in support of their latest album What Now, made a stop in Louisville, Ky recently.  Performing to a sold out crowd of devoted fans, Amelia Meath and Nick Sanborn gave a fun and energetic performance.  The stage set up was simple, with the only instrument being Sanborn’s synthesizer keyboard.  The band’s enormous lighting set up was behind them towards the back of the stage, creating a beautiful light show throughout the entire set. The crowd had their hands in their air from the moment the show began, singing and dancing along to every song.  They started their set with a new song, “Sound”, also performing their hits “Hey Mami”, “Coffee” and “H.S.K.T.”.  Playing a selection of older and newer songs, they delighted both older and newer fans alike!   Meath is a joy to watch on stage.  From the second the music started, she was dancing, making great use of the stage and feeding off of the energy of the crowd.  Ending their pre-encore set with a new song, “Radio”, they left the stage and came back out moments later to perform two more songs.  Ending the night with “Rewind” and “Play It Right”, Meath and Sanborn ensured the crowd had a phenomenal night.  They are a fantastic live band and it was a really amazing evening!