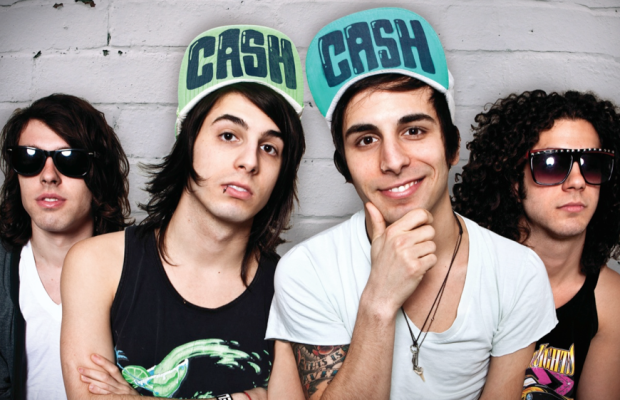 Looking back to before you were in Cash Cash, what did you think you would be doing at this point in your life?
I knew I would be doing something involving music whether it was producing, recording, playing or working on the business side at a label or mgmt company. I had such a passion for music and was lucky enough to be able to apply it in places more then just performing in a band. Being a producer and engineer enabled us to practically create everything ourselves in our studio. But for right now, the most important thing in my life is performing on stage and writing and recording our own music. Maybe down the road I’ll start producing and recording other bands, but for now we just do remixes for close friends or bands when we have free time on the road. Sometimes me and Alex mix band’s music for really good rates when we have spare time!

Who were your biggest influences when you were growing up? Are they more or less the same, or have they changed?
So many people and things have influenced me in my life. My overall drive and motivation comes from my parents. Musically, bands like the Goo Goo Dolls, Nirvana, Stone Temple Pilots, Jimmy Eat World really played an important role in getting me involved in playing an instrument and starting a band. Producers like John Feldmann and Eric Valentine really got me into recording and producing music.

Kiss Fm Seattle’s Jingle Bell Bash in ’09 was amazing. It was the most fans we’ve ever had sing along to our songs. I think it was like 5-8 thousand people singing party in your bedroom at the top of their lungs…we took a video of it and posted it on our myspace so we could always remember how loud the crowd was.

Another good show was when we sold out our local venue “School Of Rock” coming back from tour in DEC ’09. It felt really good to see all our hometown fans come out and support us after all these years.

Playing London on the UK Cobra Starship tour was also amazing. Having a sold out crowd singing our songs overseas made my heart drop.

How important is it to you to keep in touch with fans? Why is this?
It’s very important. Now a days, being in a band is more than just playing shows and recording albums. Back in the day you didn’t have Axel rose or Kurt Cobain tweeting fans or chilling with them by their merch tables. Haha no they played their shows and that was it. You had to go read books on the band to get to know anything about them or watch interviews. Now a days, the fans know everything about the bands, what they eat, what they like, what they do on a daily basis, it’s awesome, it’s letting the fans have a real connection with the bands they love. I support it 100% and we always kick it with the fans as much as we possibly can. we always read their messages and stay super late at shows to sign stuff and hang out with the fans.

What is the craziest, or your favourite tour that you’ve done? Why is this?
Hmmm, like our favorite show, I don’t think I can narrow it down to one tour, I would say Warped Tour ’09, UK Cobra Starship, the Metro Station tour, and Family Force 5 tours were a few of my favorite. There were just such amazing shows on all those tours and the bands were just so amazing. We made a lot of great friends on those tours that we still keep in touch with.

You recently did you first full headlining US tour in May. What was this experience like?
It was awesome! At first we were a little nervous about headlining, but the tour was a success and we had a blast! We got to hit the road with our good friends All Night Dynamite that we produced an EP for. It’s always good to tour with some of your best friends. It makes it 34538743597345 times more fun!

Why do you want to be Forever Young?
Because old people suck. Haha I don’t know, I’ll always be getting into stupid shit no matter how old I get. I’ll always be a teenager at heart. Of course there’s a time for work, but you can’t forget about the play….I always make sure I keep a good balance of the two.

What is the craziest tour prank that you’ve pulled, or been a victim of? What happened?
Sean P from the White Tie Affair placed a little battery powered speaker in the seat of our van that made these crazy like bird chirping/crazy bug insect type noise that had a sensor that would go off by vibration, it had like 3-4 sounds that it rotated so it was soooooooooo believable that there was some crazy ass bug or animal in our van..it was going wild as we were driving and we all freaked out. We pulled over, ripped up some of the carpet and shit. It took us like 2 days to realize where it was in the van. We never returned the prank but I’m sure one day we’ll get our revenge…mwahhhhahahahhhhhhh!!!

Cash Cash is currently touring this summer. What should fans expect at the shows?
Yeh! we’re stoked to be heading out with our good friends Stereo Skyline & The Audition! fans can definitely expect us playing a couple new songs as well as some crazier shit in our light show, basically bring your dance shoes, we’re gonna boogie like it’s 1999 baby!

Will you be heading into the studio soon to record a new album?
Yeah, we have like 3/4 of our next album already written and demoed. We’re still writing and recording the rest of it, but we have a single coming out this summer called “Red Cup (I Fly Solo) ft. Lacey Schwimmer & Spose” We’re super stoked on it and can’t wait for it to be released! It features our good friend Lacey Schwimmer who you’ve probably seen dancing on the ABC’s Dancing With The Stars. This is her first singing release so everyone is really stoked on it! And we had our boy Spose lay down a dirty rap in the bridge. The songs really a fun jam and song you can bump at any party to get people hyped!

What do you hope to accomplish in the future?
We’ll we’re accomplishing a big goal this summer. It was to go to South America and play a show. This July we’re going to Brazil to play a couple shows and do press/promo. I’m so excited for this trip…it’s gonna be wild! We’re constantly setting new goals for ourselves and it’s been such an amazing journey of accomplishing so many of them and having an amazing time in the process. We’ll see where the wind blows Cash Cash next. 🙂