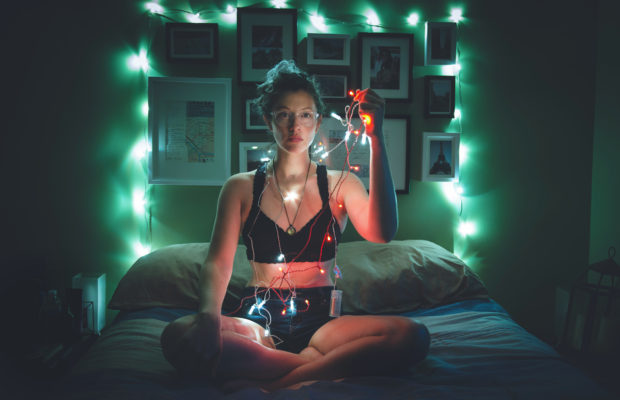 Giving an interesting perspective for this week’s interview, we caught up with Brooklyn-based photographer and musician Jeni Magana who just released her debut EP, Golden Tongue, earlier last month. Sharing some of her favorite images she has taken over the years and the process she went through to release Golden Tongue, Jeni’s story gives a refreshing take on balancing life as a both a talented photographer and captivating musician.

We used to go on a family backpacking trip every summer in California, and my uncle and my mom always brought film cameras with them.  As you can imagine, there’s not a ton of things to do when you’re out in the middle of nowhere with 3 other people.  So they started showing me how to operate the camera and let me join in on the fun.

How long have you been photographing and making music? Did you have any influences growing up that helped you discover your love for the art forms?

I’ve actually been doing both for as long as I can remember. I think my mom was responsible for me discovering my musicality as well as my photography. There was an old upright piano in our house that she barely played, but I would sit totally amazed when she would do anything. Eventually I started messing around with it as well and totally fell in love with it.

My mom also was completely addicted to keeping memories, so cameras have been around me for my entire life. She always got double sets of 4×6 images printed so that I could give some photos away, but she always had a set for herself. Of course now we have boxes and boxes of these photos and we can’t even make sense of them all. Every time we try, we end up talking about all of the good times and never get anything done. But I picked up the habit of taking a disposable camera around with me wherever I was in high school and it continued from there.

I think just like the music I make, I try to take photos that are empathetic and showcase the emotion of the moment. I try to stay out of the way and be more of an observer of the situation.  I want to tell the story from the perspective of whatever I’m shooting, not necessarily my own. I’m more interested in being a tool to have someone’s story told.

Before the release of my EP, I carried headphones and a camera around with me everywhere and photographed impromptu portraits of people listening to Golden Tongue for the first time.  They aren’t the most perfect portraits ever made, but I am most proud of these because I think it was a way to combine music and photography and make it unique to me.  And I think it was sort of a creative way to market myself and my EP release.

Bring a camera everywhere, say yes to everything, but be honest about your experience level, and google videos and tutorials for whatever it is you want to shoot next.

You released your debut EP last month! What was the overall writing and recording process like and how long were you in the studio for?

It was sort of built piece by piece. I wrote 3 of the 4 songs well before I decided to record them on this EP. Then I went in and just worked out guitar sounds and laid that down. Everything was built around the guitar track and only meant to support and feature that. I wrote the second track, “Inches Apart”, while I was finishing up the EP and I decided it should be on there too, so we tracked it in the living room in a couple hours.

As this was your debut as a solo artist, did you feel any pressure or feel like you had to meet certain expectations since you were going out on your own? What made you decide to go out and create music on your own?

It was sort of the opposite! Because it was just for me and it was my first solo experience, I could really do whatever I wanted and it didn’t matter. Nobody had any expectations of me. I just wanted to see what would come out if I let myself make the decisions.

I’ve always made music on my own, mostly secretly and just for something to do when all my work was done. The catalyst that pushed me to release this EP was my birthday in January. I always end up re-evaluating my life on my birthdays and this year it was like – you love this thing. Why aren’t you giving yourself a chance to at least see what it would sound like if you made something for yourself? So, I did.

On this debut EP, does the subject matter of the songs that are featured somehow relate back to the artwork that you have made?

I think I’m mostly trying to express the same thing, only in different mediums. A lot of my music is about emotions, and my photos are just trying to put how I feel into the photo using visual elements instead of aural elements. In my mind, it’s sort of the same process. In fact, a lot of the elements are interchangeable to me. Dark colors are minor keys. Bright colors are major keys. A flash of light or a carefully placed bit of red is the 6 major chord or 2 diminished chord. The composition is the melody. Even when editing..the curve adjustment tool is my graphic EQ. Using layers in Photoshop is using aux sends in ProTools. These aren’t real correlations at all, but it’s just how I think. My goal is to take these things, mix them up, and find new ways of telling my story. I mix up my terms a lot, too. It really confuses people sometimes.

Between music and photography, which one did you fall in love with first and what do you love about each of the art forms?

I think I fell in love with music first. It offered me immediate gratification when I was very young. I discovered I could talk and then immediately was fascinated with singing. My next instrument was piano, which is hard to make sound bad even when you’re just noodling around. I was hooked instantly. What I love about music is that it’s sort of like an old friend. When you’re in a bad mood and you listen to that song that exactly fits the mood, it feels like someone gets you. And when you’re out and about having a lovely day and you put on the perfect song, it just makes your day even better. There’s something to listen to for every part of your life. And because it’s written by other people, it’s a shared experience that you’re having with someone whether you know them or not.

What I like about photography is the storytelling aspect. We go through life unconsciously picking up on what’s happening around us through subtle body language cues and stuff we catch out of the corner of our eye.  And if you capture a scene at the exact right moment, you can tell an entire story just with that one image. The way that person’s eyes are squinted, the dog in the background, the bag sitting almost out of frame. And you’re not just telling the story to the person that is looking at the image; you’re presenting them with just the right amount of information and the person draws their own conclusions from that. I think that creates a stronger bond between artist and audience because, just like music, it’s a shared experience.

Golden Tongue is out now and available for purchase here.