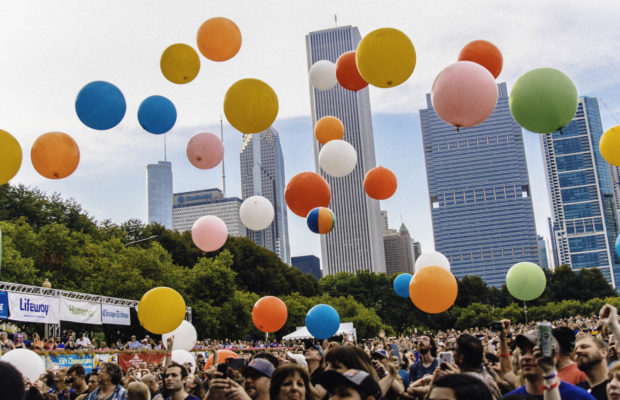 The Flaming Lips with Le Butcherettes and Half Gringa

Words and Photos by Kate Scott

The Taste of Chicago is one of the city’s biggest events of the year. Hundreds of thousands of people flock from different neighborhoods and suburbs to try street food, fine cuisine, and unique treats that can only be enjoyed on a hot summer day. The massive festival doesn’t just showcase delicious eatables, however; this year, the Department of Cultural Affairs and Special Events recruited some of the biggest, most exciting names in music to play a series of free concerts for Chicagoans. On Saturday, The Flaming Lips teamed up with Half Gringa and Le Butcherettes to put on an intense and psychedelic set that was filled with sweaty screaming, giant unicorns, and, of course, the hamster ball (if you don’t know what that means, you’ll definitely want to keep reading).

To start the day off, Chicago’s own Half Gringa played a mellow and meaningful set that showed the audience why the band was awarded a place on Chicago Magazine’s “Best Albums of 2017”. The Tejano-style band is the brainchild of Izzy Olive, a local artist who celebrates her Venezuelan heritage with intimate lyrics, dreamy melodies, and an overall sense of calm that goes against what you’d typically expect from a soft-spoken singer/songwriter. Half Gringa sound like a cross between Sharon Van Etten and Calexico, a welcome sound for a warm summer day. They didn’t have any crazy makeup or props, but they were an excellent opener for The Flaming Lips.

Next, Le Butcherettes turned up the volume to 11 and played an intense, powerful set of avante-garde punk rock.The band’s frontwoman, Teri Gender Bender, came onstage adorned with a feather crown, a dark gold cape, and bright red lipstick smeared across both her lips and eyes. Speaking in Spanish and singing in English, Teri and Le Butcherettes are a perfect combination of hardcore Mexican punk and vaudevillian-style theatrics; it’s impossible to take your eyes off of the stage when Le Butcherettes are playing. After their incredible set was over, Teri immediately jumped offstage and greeted fans at the barricade. She took photos, chatted with both English and Spanish-speaking fans, and made sure everyone was able to say hi to her before she went backstage.

Wayne Coyne has been the frontman for The Flaming Lips since its inception, and he has only become more magical over the years. As he and the rest of the band came onstage, he couldn’t stop smiling and made eye contact with as many fans as possible as they went into “Race for the Prize”, one of their biggest and most majestic hits. The Flaming Lips haven’t really changed their setlist much in the past few years, but the energy, interaction, and massive amounts of rainbow-colored props are always different. Normally, the band plays in big fields, but because the Taste of Chicago’s stage is on concrete, Wayne had to alter the fan-favorite hamster ball climb through the crowd. A crew of five men carries the ball to different parts of the pavillion, but the fans’ excitement and enthusiasm was just like they were carrying Wayne themselves. The Taste of Chicago picked an excellent lineup for Saturday, and hopefully The Flaming Lips will be back in Chicago soon.