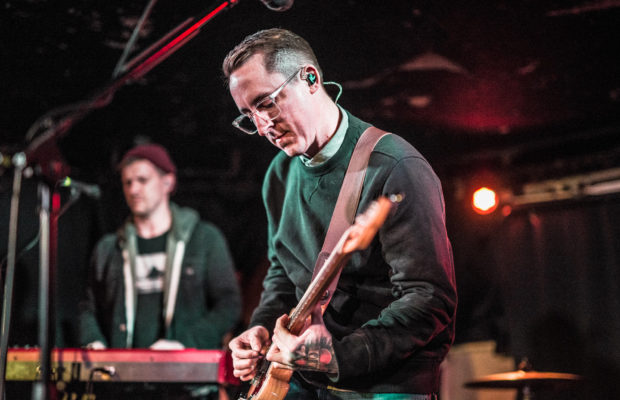 Doors opened at 7:00 pm and they didn’t waste a second getting the music started with Laika who performed for the very first time that night. Unfortunately, we didn’t arrive in time to capture photographs but her voice was beautiful and lured the crowd in. Despite it being her very first performance she had the crowd singing along to her first single “Juicebox” which is a testament to how far Laika is sure to go.

Taking the stage next was Cory Wells who’s performance was absolutely captivating. The California-based songwriter only signed to Pure Noise Records last year but his musicianship exudes that of a seasoned pro. He has a knack of knowing how to hit your heartstrings with his emo sound and heartbreakingly beautiful lyrics. In the moments he switched from singing to screaming he’d pull back from the mic and you could hear his voice all the way in the back of the venue. His eyes kept tightly shut while he sang were indicative of how sincere his lyrics were and came from the deepest parts of his soul. His performance was truly breathtaking and gave this writer goosebumps. He recently released two singles on February 20th for his songs “Patience” and “Lost”, check them out to see the bone-chilling goodness that is Cory Wells.

Well’s Pure Noise labelmates and Toronto’s very own Selfish Things performed next to a very excited crowd; some had even travelled up to 7 hours just to see them. Their energy is infectious and filled the room as they took the stage. They had the crowd head-banging to every song except when lead-singer Alex Biro performed solo on the piano which brought a few fans to tears as the lyrics spoke truthfully about battling depression and learning to love yourself again. Biro expressed his gratitude for everyone’s attendance and continued support, his eyes seemed to tear up as he earnestly said they’re not sure how long they’re going to be doing this for but if he died tomorrow it would all be worth it. Sneaky Dee’s isn’t like other venues, bands actually have to walk through the crowd to get on and off the 2.5 foot tall stage, there’s no side access, which makes for a very intimate and memorable experience and as the band left the stage Biro hugged each fan one by one and hung out by the bar to talk to fans and friends after their set. It’s not often you come across a band that produces such amazing music, speak truthfully of personal experience and are genuinely so sincere.  Pure Noise Records have two real gems with Cory Wells and Selfish Things.

Having just gone through a wave of emotions with the previous two performances, headliner William Ryan Key, former lead-singer of Yellowcard took to the stage to perform more thought-provoking and emotionally-driven music. His performance included songs from his most recent EPs including “The Same Destination”, “The Bowery” and “No More, No Less” sprinkled in with a few Yellowcard classics like “Keeper”, “Only One” and “Ocean Avenue”. It was a perfect intimate performance and a memorable night of emo music that brought back so many nostalgic memories and reminded us that we’re all the same broken kids in these adult-looking shells, emo is alive and well.

The Virtue tour continues throughout the US and makes one more Canadian stop in Vancouver, BC until April 2nd so be sure to catch one of the dates!