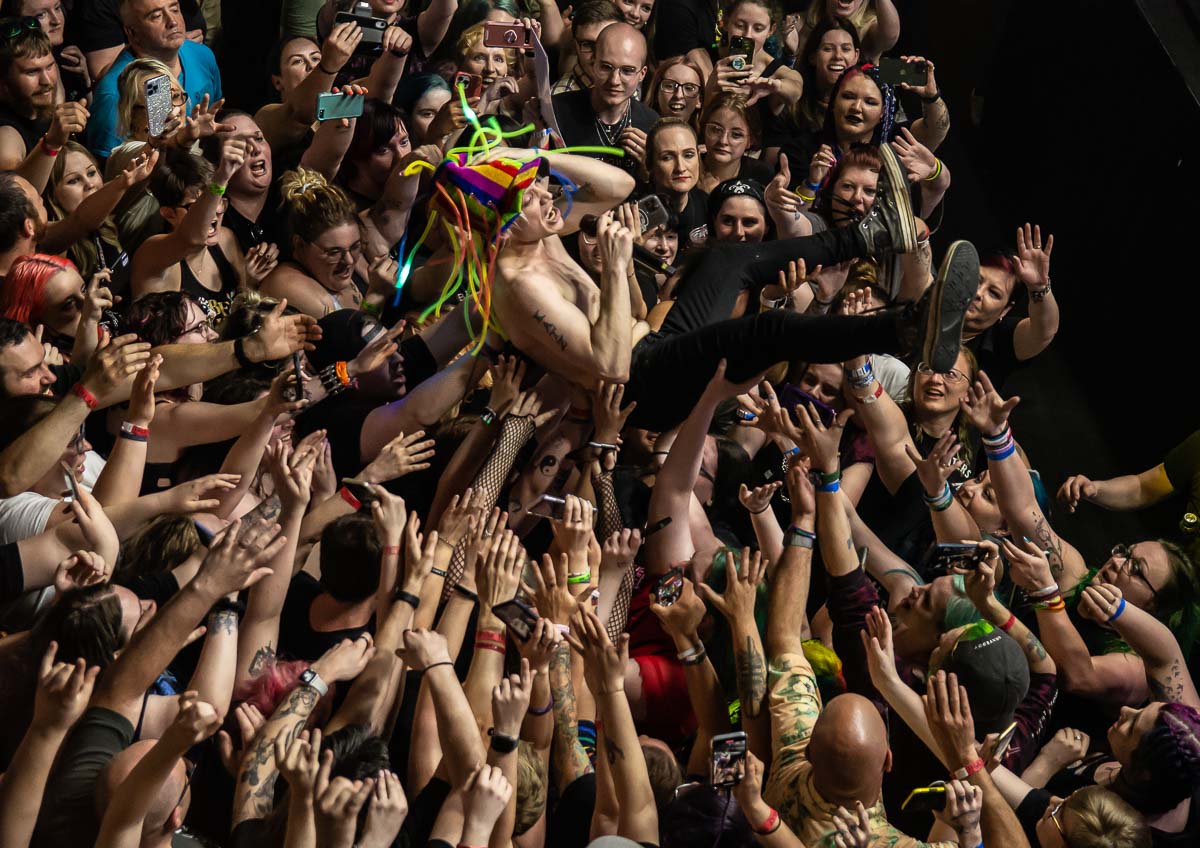 Badflower with ’68 and BRKN LOVE

Los Angeles rock band Badflower brought their This Is How The World Continues Tour to Louisville, KY on May 1st, their final US date before heading to Canada.  Touring in support of their 2021 album This Is How The World Ends, they performed this evening to a nearly sold out crowd of passionate fans!  Opening the show this evening was Toronto singer-songwriter Justin Benlolo’s latest project, rock and roll band BRKN LOVE. Announcing to the crowd how sad he and his band were that this was the final night of tour, they thanked Badflower for bringing them out and proceeded to rock hard and get the crowd singing and dancing along!  Towards the end of the set, Benlolo took his shirt off and drummer Nikko Yamada from the band ’68 came on stage and rubbed oil all over Benlolo’s chest, creating a humorous moment for the band and the crowd! Playing plenty of songs from their 2020 self-titled album, they ended their set with their 2019 single “Shot Down”.

Next up was Amercian noise rock duo ’68, comprised of singer/guitarist Josh Scogin (formerly of the hardcore punk band The Chariot) and drummer Nikko Yamada. These guys are pure energy on stage and proceeded to rock the crowd’s faces off with their fun and high-energy set!  Towards the end of their set, the guys from Badflower came out and sat on stools near the side of the stage and proceeded to rate the band’s performance, causing hilarity to ensue!  With signs that gave a numerical “grade”, such as a 1, 2, or 3, at one point Badflower singer Josh Katz held up a sign that read “BRKN LOVE was better”!  Badflower then exited the stage and ’68 finished their set, leaving the crowd more than ready for the night ahead!

Badflower came out on stage to soft lighting and their own lighting set up at the back of the stage, starting things off with “White Noise”, “Fuckboi”, and “Don’t Hate Me”.  The crowd was rowdy from the start, in the best possible way, dancing and singing along to every word in unison.  Having formed in 2013, the band has garnered a loyal and passionate following.  Singer/guitarist Josh Katz chatted quite a bit with the crowd between songs, and early in the set when lead guitarist Joey Morrow was having equipment issues, he engaged the crowd with some humorous banter.  Asking if anyone had to work the next day, he asked who had to wake up the earliest the next morning? When someone shouted 5 am, he asked “Why are you here?”, joking with the fan that “That’s not responsible!”! At one point a fan handed him a shoe to sign, with him gladly obliging.  The band performed a great collection of songs that included “Johnny Wants To Fight”, “Heroin”, “The Jester”, and “Ghost”, with the band not only heavily engaging with the fans but also with each other on stage.  In a funny moment later in the set, when a fan had the unfortunate moment of crowdsurfing as a song ended, Katz joked with the man about how bad his timing was and proceeded to play a little song with bassist Alex Espiritu, saying “We just made that up on the spot.  It’s called “Crowdsurfing In Silence”!”, to which everyone laughed!  There was also a moment in the set where Katz realized it was a fan’s birthday. “It’s your birthday? How old are you? 16? Well, you have a good 14 years left, so enjoy them! I hope this is a good memory for you.  One day you’ll wake up and everything will hurt and you’ll hate everyone!”.

Near the end of the set the band performed “Stalker”, and Katz came out on stage with a large hat with colorful strings hanging off and proceeded to crowd surf for much of the song, to the delight of the crowd!  “Ending” their set with “Machine Gun” and their hit song “Family” from their latest album, they walked off stage as the crowd was chanting “ONE MORE SONG!”.  The guys from ’68 and BRKN LOVE proceeded to come out on stage, played one note, screamed “NO!” to the fans request for one more song, and then left the stage.  Badflower then came back out for two more songs, ending the set with “We’re In Love” and “30” they definitely gave the fans a night to remember!  With a revolving door of band members from each band performing/appearing on stage during each other’s sets, it made for a really fun night!