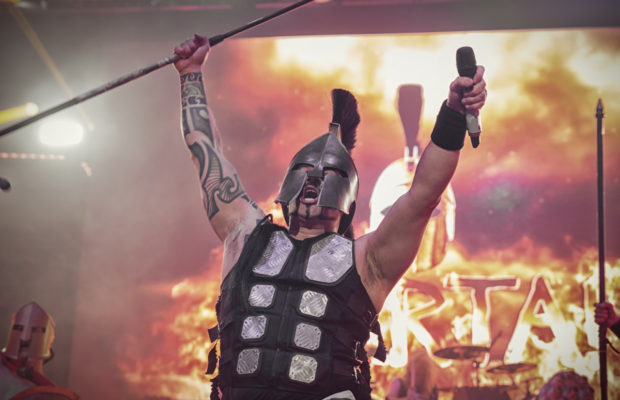 Photos and words by John Gilleese

Swedish power metal outfit Sabaton released their eighth studio album, The Last Stand, in August 2016 via Nuclear Blast records and since its release, they have undertaken a massive tour which will essentially have them on the road until August when they headline their own festival, Sabaton Open Air, in Sweden.

During the recorded intro track of In The Army Now, the curtains on stage are removed to reveal the now customary set design of various war paraphernalia, rounded off by Hannes van Dahl’s impressive tank drum riser. Ghost Division leads off the set, followed by Sparta from the new record which comes complete with 4 half-naked Spartan warriors for added effect on what is already a spectacular production. The only respite in the 17 song set comes courtesy of an acoustic version of The Final Solution, but if you came to a Sabaton show to relax, you’re in for a shock.

Each time Sabaton pass through Manchester, they play in a bigger venue to a packed house. I would be surprised that, if in a couple of years, they aren’t packing the Arena with yet another amazing display.