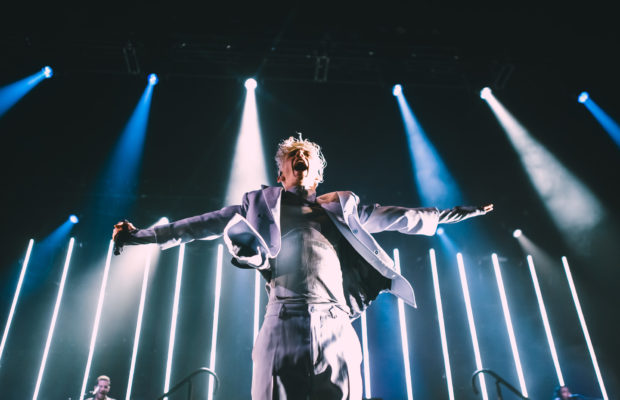 Troye Sivan brought his Bloom Tour, with Carlie Hanson and Kim Petras, to Vancouver for the final night of its month-long run. Right from the get-go the Queen Elizabeth Theatre was buzzing with excitement and joy.

Kicking off the night was 18 year-old Carlie Hanson, who may only have 5 songs out, but has an incredible, bouncy stage presence as if she’s been performing in front of 3,000 people for her entire life. Going straight into ‘Why Did You Lie’ and ‘Toxins’, the audience lit up, clearly excited to see the newcomer and sang along with her as she hopped and bounced her way across the stage. She slowed things down momentarily with a new, slower song, ‘Hazel’ but soon after she jumped straight into her hit ‘Only One’, sending the room into a dancing frenzy. Clearly into the song herself, Hanson was jumping around so much that her monitor pack detached itself from her body, causing a good quarter of the song to be sung/laughed from the curtain while she got it sorted out. Her final song of her set and the tour was the also lively and upbeat song, ‘Us’. If this is what Carlie can do in only a year of releasing music, there’s no telling how far she’ll go!

German-born pop singer, Kim Petras, was up next, and despite some controversy about her joining the tour she seems to have been fully embraced by fans, who knew all the lyrics to her songs and danced the entire time. Full of confidence, she strutted around the stage as she sang some of the catchiest songs out at the moment, including ‘All The Time’ and ‘I Don’t Want It At All’. Petras seems to have been born for the stage, striking poses, playing around with the audience, and hitting every note like it’s no trouble. Her set was full of bright and shiny fun, allowing everyone to just let go for 40 minutes and not worry about anything outside of the room.

The entire venue was positively buzzing by the time the lights went down and the intro to ‘Seventeen’ started. The room erupted when Troye Sivan stepped in front of the curtain and when he started singing the entire room started singing right back to him. Out of the 18 song setlist, this will be one of only 3 songs he remains even remotely static for.  As the song ended, he disappeared back behind the curtain before it dramatically dropped, revealing the three-levelled stage for the first time, with Sivan on top, heading straight into ‘Bloom’ and then ‘Plum’.

As soon as Sivan hit the stage it was clear that he feels at home on the stage and in front of his fans, his energy was twinkling with excitement and fun, as he makes the most of the final show of the North American tour. He danced and strutted around the stage with a sultry swagger, leaning into the sexiness that his songwriting and music exudes. Throughout the set, he engaged with the audience as if they were his family and friends, which he made sure to point out. As he performed he was constantly leaning towards the crowd, he posed for a selfie from the stage, and got right down into the crowd, all while making everyone in the room feel loved and validated as a person. He said it himself, the show is about so much more than him. Between all the heartfelt moments though, there were plenty of wonderful moments courtesy of it being the last show, including his band all swapping instruments while he was paying attention, jokingly only inviting the people in that room to his next Vancouver show, and thinking out loud about how he is able to go all in with his vocals and dancing, because he doesn’t have another show the next day.

Troye Sivan is the performer of our generation, an advocate for all that is right in the world, and a supremely talented, fun young man. His North American tour may be over for now, but he will be back, and you need to catch him when he is.