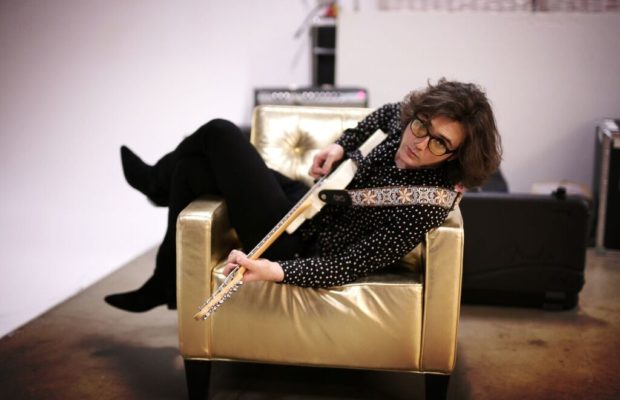 King Leg is the musical brainchild of Omaha, Nebraska musician Bryan Joyce.  Mixing the sounds of early British and American rock and roll, classic country and R&B, with a voice that’s drawn comparisons to Roy Orbison, Joyce has created a sound that is unique and fresh.  Although Joyce was born in Omaha, he moved to Nashville in his late teens.  It was in Nashville that he was discovered by country music icon Dwight Yoakam, who loved his music.   Although he grew up avoiding country music, his job working concessions at the Ryman Auditorium sparked a love for classic country music.  Joyce moved to LA in 2016 to further his career and assembled an LA based band, releasing his debut album Meet King Leg on October 20th of last year on Sire Records.  The album, which was recorded at the infamous Capitol Studios in Hollywood, was produced by Dwight Yoakam and Chris Lord-Alge, who also mixed the album.  Rolling Stone Magazine has named King Leg one of the 10 new country artists you need you know.  They recently wrapped up their supporting spot on the first leg of the LSD Tour, which features Lucinda Williams, Steve Earle and Dwight Yoakam, with the second leg of the tour running from August 1st through the 18th.  Our staff writer Emily May spoke recently with Joyce by phone in which he discussed the debut album, working with Dwight Yoakam and moving to LA.  You can stay up-to-date with King Leg and all upcoming tours and festival dates on his website, Facebook, Instagram and Twitter.  You can stream his music on Spotify and SoundCloud.  You can purchase his music on his website and from iTunes and Amazon Music.  You can check out the video for “Great Outdoors” below, as well as his cover of Little Richard’s “Lucille”.  Photo credit: Emily Joyce.

Your debut LP was released in October of last year. What can you tell me about the inspiration behind the album, as well as the songwriting process? What was it like recording at Capitol Studios in Hollywood?

Recording at Capitol Studios was inspirational in and of itself. The songs were a bunch of different songs that I had written probably over a ten year span. Dwight (Yoakam), who co-produced the album with Chris Lord-Alge, went through a bunch of demos with me that I had created over the years and picked the ones he was interested in working on. As far as the inspiration for the songs, I couldn’t really say where that comes from, other then any every day moment or even just a mundane day watching YouYube…something may inspire me (laughs). The thing about me with songwriting is that as long as I’m playing the guitar and just goofing around and noodling on my guitar, songs just kind-of appear. When those songs do appear, you kind-of get excited in the moment and the inspiration grows out of that, as well…just creating something new and fresh. It’s similar to writing, in that you don’t always know where the inspiration comes from. Sometimes it just appears. With recording at Capitol Studios, I was nervous before going in there but something kind-of odd happened on the first day we went in. I was one of the first ones there and it was really quiet and we were still setting things up and I just walked in, took a few breaths and was just ready to work and record. It felt like I was where I needed to be. It was amazing how everything happened when looking at the path I took to get there. I didn’t expect it to happen that way or really at all and I’ve just been enjoying every little moment along the way.

You played music as a teenager and moved to Nashville in hopes of starting a songwriting career that didn’t work out. Did you have musical aspirations growing up or did you get serious about music a bit later in life?

Moving to Nashville was a big step to pursue music seriously and it’s always kind-of been a pipe dream. I started playing guitar when I was 11 or 12 years old. You always keep that kind-of, or at least I did, childish-dream like atmosphere about playing guitar and doing what Elvis did, or the Beatles. There was a lot of daydreaming involved and I’m still surprised about how it turned out with the King Leg pipe dream itself. After I had kind-of given up on music for a while, I thought of the King Leg thing as a fun way to do music again. It been growing and growing and is still growing to this day.

What led you to move to LA in 2016 , rather then stay in Nashville, and become more serious about performing?

I wasn’t doing music as much in Nashville, other than songwriting, on my own while I was going to school or working jobs. The King Leg idea was born in Nashville, but in order for it to really blossom, I had to move out to LA to be in this music scene here. I moved out here a couple of years ago and put an LA based band together and it’s kind-of been that-an LA based rock band. The people here at Warner Brothers Records and Dwight and Chris Lord-Alge, they seem to understand what I was doing more so than others. They were just picking it up, unlike some of the folks in Nashville. I’m just following the sun, as well (laughs). Everyone does that here.

What do you see as the major differences between the music scenes in LA versus Nashville. Do you see one as easier for musicians to catch their break in over the other?

Well, I really don’t think that it’s easy anywhere (laughs)! There’s a lot of luck involved. I think that Nashville still has this songwriting culture, with songwriters moving there to do that as a business and working together and collaborating with others songwriters. I haven’t witnessed that happening as much in LA. I know it happens, I just don’t hear people talking about co-writing a lot here like I would hear in Nashville. I think with something like this, or any endeavor in life, as long as you stick with it and don’t give up and continue to get better at what you’re doing, the likelihood of you succeeding at it is going to grow along the way with you. That’s still my plan, to keep doing this and not go anywhere and keep at it.

What was it like to be in the studio with Dwight Yoakam? He’s such an iconic industry veteran! Did he give you any good advice of things he’s learned over the years?

You learn a lot just from being around him and watching him in the studio. He has a really amazing ear and mindset for arrangement. I really enjoyed taking these songs in their kind-of bare bones form that I had them in, writing them with an acoustic guitar, and just seeing them really explode in the studio with his arrangements and Chris Lord-Alge’s mixing. There was one moment that I recall from the studio. I was trying to sing a part…we were working on this part for quite some time. I asked “Should I do it more like this or that” and Chris Lord-Alge and Dwight got on the talk-back and just said “Do it like King Leg would do it”. That’s stuck with me the whole way through, just that support from both of them. Also, Dwight has an amazing work ethic that I really appreciate and hope to achieve one day as well. We got a lot done in the studio in a short amount of time because of Dwight’s work ethic.

I read where you had mentioned how Dwight and others in the LA scene saw through the jokes and novelty in your music and found something deeper in your music that maybe you weren’t aware of. What do you think that was?

Well, there’s a song on the album called “Another Man” and Dwight’s kind-of said off the cuff to me that it’s one of his favorite’s. He never really said why, but I wrote that song when I was missing out on some opportunities in life years ago and getting older and just kind-of seeing the dust settling around me. I think he sifted through the novelty of my music and got to that song and could see maybe some of the deeper sentiments that I had in that song, and in others as as well.

You’ve been touring as support on the LSD Tour (Lucinda Williams, Steve Earl and Dwight Yoakam), which started on June 12th and runs through August 18th. What has it been like touring with such legends and what have some highlights been for you?

Yeah, we’re really happy to say we’ve finished our first leg of the tour on the East Coast and into the Midwest. We’ll be starting the next leg on the West Coast at the beginning of August. There are three bands…sorry, four bands (laughs)…and it’s a big production! It’s really been amazing to see it all come together so successfully with the lights and the PA that travel with us on the road and the four bands transitioning throughout the night. Being able to put on a show in one night like that, night after night, is really amazing to see. I’ve enjoyed going out and watching Steve and Lucinda from the audience’s perspective and just watching how flawlessly they put on their show and interact with their band. I’m looking forward to doing more of that.

What’s next for you? Are there any other tours or festivals that you are looking forward to?

Yeah. I was just rehearsing with the band last night for a festival date that we’re doing on July 7th in Milwaukee at Summerfest. I’m really excited about that because that will kind-of be the first festival I’ve played.

Yeah, it seems to be one of the big ones that’s been around for a while. We’re opening for The Wild Feathers and Kip Moore that night which will be really fun. We’re just looking forward to seeing how those things come together and be backstage and see the other side of it.

Is there anyone specific at Summerfest that you are looking forward to seeing?

We’re flying in the day before and I’m hoping that we can get up there to see The Flaming Lips play! I would enjoy that.

Their live show seems like a lot of fun!

Yeah! I would like to see him bring out that gigantic hand (laughs).

Thank you so much for taking the time to talk to me!

Thank you for doing this!