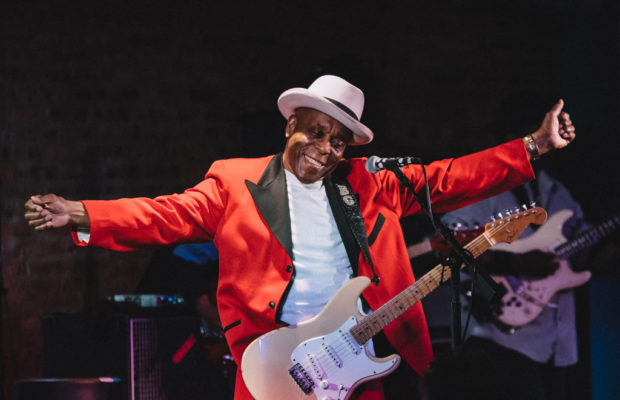 “When I left Louisiana, I told my momma I was comin’ home in a polka dot Cadillac. She ain’t never got to see me play my music, so that’s why everything, my guitar straps, my guitar… it’s why it’s polka dot now.”

Chicago is a city of blues. When Buddy Guy moved from Louisiana to the Windy City nearly 60 years ago, he was enamored by the city’s sounds. Following in the footsteps of such Chicago icons as Muddy Waters, Buddy Guy has become one of the most important blues musicians of all time. With all this grandiose attention he’s received over the years, it would be easy for Buddy to have developed an ego. But, playing onstage in a modest bar in the South Loop, this incredible musician acts like just another member of the crowd. Of course, he is playing at his own bar, Buddy Guy’s Legends, where he offers Buddy’s Brew (a craft beer you can only buy at his bar) and plays for sold-out audiences throughout the year.

It’s humbling to see an 80 year old legend create such a loving rapport with his audience. Deftly playing a slew of guitars with virtuosic precision and passion, Buddy’s love of music is what keeps him smiling through every song. Stopping to talk to the crowd after every tune, the man made everyone laugh with stories, crude jokes, and silly banter. For someone who inspired Jimi Hendrix, Jeff Beck, Eric Clapton, and Jimmy Page, it’s nothing short of delightful to hear Buddy tell stories of fans running up to him at the grocery store and his response be “I’m doin’ what you’re doin’: I’m buying fuckin’ food.”

Playing such blues classics as “Cheaper to Keep Her” and “I Just Want to Make Love to You”, Buddy joked that people were often surprised at his shows that he played more covers than originals. He gave the people what they wanted and played “Skin Deep” and “Feels Like Rain”, both songs that had the entire bar silent. No talking, no taking pictures with their cell phones. Just listening. And as I sat there with my head resting on my hand, I found tears rolling down my cheeks. This feeling, this indescribable moment shared by hundreds of us, is why Buddy Guy will always be one of the greatest. This city is lucky to have him, and this world is lucky to have his music.