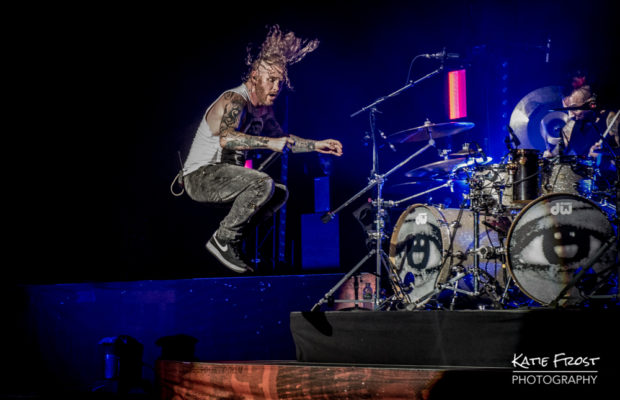 On Monday night US rock heavyweights Stone Sour [https://www.facebook.com/stonesour/] played the first of two shows at Brixton Academy in London in support of their latest album Hydrograd (released on 30 June). A queue of eager rock fans snaked around Brixton Academy in South London on a chilly December evening, and before long the close-to-5000-capacity venue was almost full. To my knowledge the show wasn’t sold out, but it must have been very very close.

First to hit the stage were The Pretty Reckless [https://www.facebook.com/theprettyreckless/]. I have been a fan of this New York four-piece rock band since they first appeared on the music scene in 2009 and it is always a pleasure to see them play live. Opening their set as they usually do with “Follow Me Down” they wasted no time in getting everyone in the mood for an evening of rock. Front-woman Taylor Momsen wore her trademark long leather coat and knee-high boots as she snarled into the microphone and flicked her blonde hair to the driving beat being created by the rest of the band; Ben Phillips on lead guitar, Mark Damon on bass and Jamie Perkins on drums.

Over their three studio albums The Pretty Reckless have really honed their sound, with their most recent album Who You Selling For (2016) providing a more soulful take on their usual ferocious rock and roll sound.  Momsen’s raw and emotive lyrics combine perfectly with classic rock melodies and a real rock and roll attitude. Looking around the crowd there seemed to be a lot of The Pretty Reckless fans in the crowd, and those who didn’t seem to know who they were at the start were nodding their heads appreciatively by the end of their set – a solid 10 tracks, which is a good innings for a support band. As well as tracks from Who You Selling For the band treated the crowd to some of their most famous songs from their previous two albums Light Me Up (2010) and Going To Hell (2014); including “Make Me Wanna Die” and “Going To Hell”. A brilliant performance and a great start to the evening!

Next up was the main event – the mighty Stone Sour. I was going into this one cold; whilst I have heard of the band I have to admit to never having heard any of their music before or seen them live – not sure what I have been doing for the past 25 years! As myself and my fellow photographers waited in the wings we were warned to stay clear of various pyrotechnic machines…and then the lights went out and we made our way into the photopit as “YSIF” (You Suck In Full) played into the room as the intro to the band’s set.

Stone Sour started as they intended to go on; black boxes on the edge of the stage sent plumes of sparks into the air as the band launched into “Taipei Person / Allah Tea”. Front-man Corey Taylor bounced around every inch of the stage sporadically spraying the crowd (and unsuspecting photographers) with water. He and the rest of the band looked pumped to be on stage playing to a crowd of appreciative fans, some of whom had been queuing outside for many hours to nab a coveted spot at the barrier. During second song “Knievel Has Landed” Taylor fired a red confetti cannon into the crowd, much to their delight.

Having released six studio albums the band have a huge back-catalogue to draw from, and they play a humungous eighteen-track set of their most popular hard-rock / atl-metal anthems, including tracks from their most recent album Hydrograd which was came out in June of this year. The crowd had their arms firmly in the air for the majority of the evening, singing along to every word. Corey Taylor was endlessly charismatic and the entire band were an absolute dream to photograph during their incredibly entertaining performance. Stone Sour displayed the perfect balance between fun and rock and I for one will definitely be checking them out again next time they return to London!

Photos and words by Katie Frost

Do Me A Favour