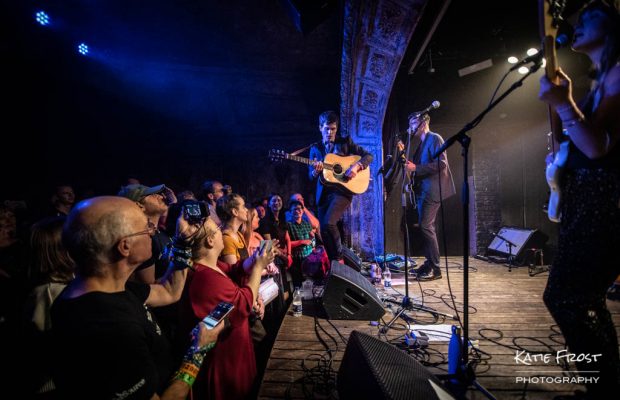 Tom Speight is a London-based singer-songwriter who I first saw perform on the final day of Shout About It Live music and photography festival in Liverpool last summer, where I was exhibiting some of my live music photos. When I saw he was playing just down the road from where I work I decided it was definitely worth checking out his live set again. Omeara is a 320-capacity venue in Southwark (owned by Ben Lovett of Mumford & Sons) with a lot of character, and was a great location for an intimate singer-songwriter gig.

The show was the last of a 14-date tour of UK / Ireland to promote Tom’s debut album Collide, which was released on 12 April. Not only was it his biggest headline show to date but it was entirely sold out, which must have been such a great feeling for an artist who has been through so much in the past five years, having been diagnosed with Crohn’s disease in 2014 which meant taking time out for operations, treatment and rehabilitation. Luckily he is now back on the road to recovery and was on top form tonight.

At 9:15pm sharp Tom took to the stage, accompanied by a guitarist, bassist, keyboard player and drummer. He looked delighted to be playing to a sold-out crowd, and launched straight into “Waiting” from his recently-released debut album Collide. There was a great atmosphere in the packed room, and everyone seemed to be having a wonderful time – both those on and off the stage. Tom and his band played a wonderful set largely made up of tracks from Collide, but with a few other fan-favourites from his past EPs thrown in for good measure. In-between songs Tom was charming and provided the crowd with various amusing anecdotes.

He ended his set in a truly spectacular fashion with a glorious rendition of “Evermore”, for which he and his band were joined by a choir who had been secretly positioned on the steps towards the back of the venue. Everyone in the room was singing along and it was a truly magical experience..albeit it a hot one due to the volume of people packed tightly into such a small room. Tom Speight is surely destined for a fantastic career delighting fans all over the UK, Europe and beyond.

Support came from London-based pop artist Hedara (aka Scarlet Billham), who also supported Tom at his album launch in London back in April. Accompanied by a keyboard player and drummer (on electric drum kit / sample pad), she played a short but sweet six-track set including “Slow” and “Numb” from her debut EP. Hedara’s vocals were emotive and powerful, and her performance went down very well with the crowd.

Tom Speight will return to the UK at the end of November to play three shows in Bristol, London and Liverpool as part of a thirteen-date worldwide tour to further promote Collide – get all the details here.