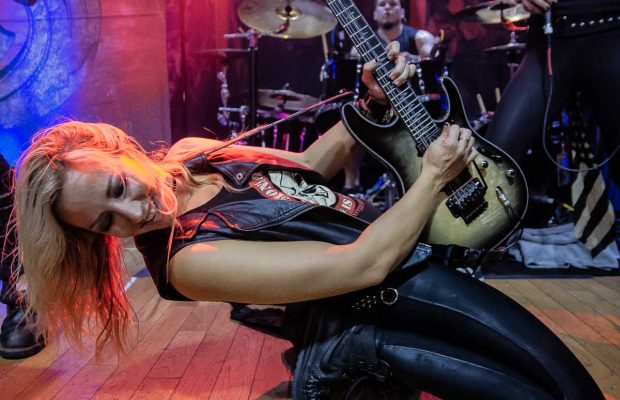 Nita Strauss brought the rock to Zanzabar recently, performing to a packed room of diehard fans.  Strauss, well-known as the guitar player for Alice Cooper and for the all female Iron Maiden Cover band The Iron Maidens, is also a talented solo artist.  She recently released her debut solo album Controlled Chaos and is currently touring in support of the album.  Getting to the venue early, there were plenty of fans hanging out, eating, drinking and playing pinball as they waited for doors to open and many fans had also arrived early for an extensive VIP experience with Strauss.  As doors opened, a long line of fans had formed, waiting to get a spot as close to the stage as possible.  It always makes for a special concert experience when you get to see a popular artist perform in a small venue and stand right against the stage.  As the fans filed into the stage area and secured their spots, there was as air of excitement in the room from everyone eager for the music to start!

Opening the show was local rock band Banshee Child.  Vocalist Matt Meredith, guitarist Joshua Catlett and bassist Vince Heller made great use of the limited space they had on stage to move around and engage the crowd.  Drummer Colin Yopp, clad in a colorful printed shirt and sunglasses, was rocking the drum kit throughout the set.  They had a lot of fun interacting with each other and also with the crowd.  Being a local band, they had plenty of friends and family in the crowd to cheer them on!  Next up was New York theatrical metal/rock band Kore Rozzik, who gave the crowd a true rock and roll experience this evening.  It’s easy to see why these guys have earned the reputation as a can’t miss live act…they are the epitome of a live band.  Singer and band namesake Kore Rozzik, guitarist Andrei Patorski, drummer Louie Drums and guitarist Alex Gil came out on stage and proceeded to give the audience a fun show, complete with well-timed fog machines, props and costumes/accessories!

Next, Nita Strauss took the stage to deafening cheers and applause.  Along with her band mates, drummer Josh Villalta, keyboardist Kat Scarlett, bassist Christopher Dean and rhythm guitarist Johnny Young, she proceeded to shred on her guitar and keep the crowd engaged and entertained throughout the set.  Spirits were high this evening and there was a wonderful energy that filled the venue, with everyone in attendance cheering and dancing and having a great time.  Strauss and her band were having a great time on stage and were feeding off of the crowd’s infectious energy and excitement.  Starting out the set with “Pandemonium 2.o”, she and her band proceeded to perform most of Controlled Chaos for the fans.  Towards the middle of the set, she performed a cover of Iron Maiden’s “Aces High” which had the crowd singing along.  Villalta had a drum solo at one point, as well, for which he used two mini Louisville Slugger bats as drumsticks which was highly entertaining!  Strauss is a phenomenal guitarist and stood at the edge of the stage for a large part of the set, commanding the crowd’s attention, which they were eager to give.  As they ended the set with “Most Desperate Hour”, the crowd was sad to see the music come to an end.  Strauss told the crowd she would be back at the march table after the show which caused everyone to rush the table immediately after the show!  She put on a phenomenal performance and gave her fans a wonderful night of music.