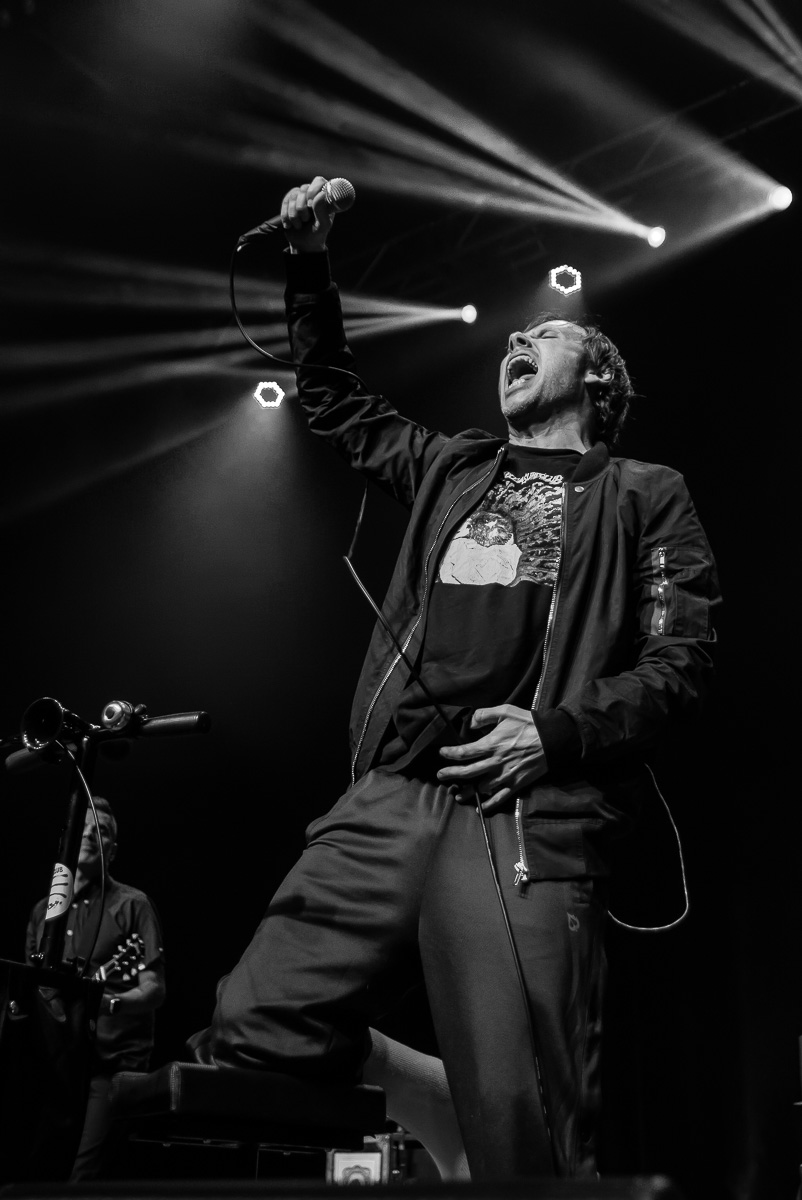 Thursday with Cursive, The Appleseed Cast, and Nate Bergman

New Jersey post-hardcore band Thursday brought their recent tour to Louisville, KY.  Originally scheduled for January, the show was rescheduled due to inclement weather.  Although a light turnout at doors, the venue quickly filled up as the music started, with a large crowd filling out the venue for the evening.   Starting things off was Washington, DC singer-songwriter Nate Bergman. Starting out acapella, he then transitioned to performing the rest of his set with an acoustic guitar.  He chatted a bit with the crowd between songs, thanking them for coming out and thanking Thursday for having him on the tour!  He also announced that his new album Metaphysical Change will be out on May 20th.  Next up was Kansas indie alternative rock band The Appleseed Cast.  Having started out in 1997, the band has seen some line up changes over the years but with 9 studio albums, the most recent being 2019’s The Fleeting Light of Impermanence, they performed a nice mix of songs from their extensive catalog.  Next up was Omaha indie rock band Cursive.  An incredibly fun and energetic band on stage, singer/guitarist Tim Kasher was a whirlwind of energy throughout the set.  Jokingly asking the bar “Do you have any Old Forester’s left?  Just checking!” (the venue is Old Forester’s Paristown Hall), he talked about how great the tour had been so far  and that they had arranged their setlist in order by album.  By the time they finished their set, the crowd was nice and warmed up for Thursday!

As the dimmed lights came back on, Thursday hit the stage to Queen’s “The Show Must Go On”, with singer Geoff Rickly wheeling himself out on a scooter with a fist in the air.  He went on to tell the crowd that he had fallen off of the stage at a show a few nights prior and had broken his foot.  Rather than cancelling shows however, he said he was determined to make this the best show of the tour yet!  He then got nostalgic for the old days in Louisville, reminiscing on the first Krazyfest and talking about how much he loves this city and scene and enjoys playing here, launching into “Cross Out The Eyes”.  He then dedicated the next song, “Signals Over The Air”, to anyone who always felt like they didn’t belong and couldn’t be themselves. Joking that everyone was probably wondering where the party tunes were, the band then performed a song “Jet Black New Year” about a New Year’s Eve party that went horribly wrong, followed by “This Song Brought To You By A Falling Bomb”, which saw Rickly sing the song solo, with the other band members leaving the stage.  The next song, “A Hole In The World”, was the one that Rickly said he had broken his foot singing a few nights before, therefore having a bit of trauma attached to it, and told the crowd it was probably best if he sat down while singing.  Although the setlist had many gems from their extensive catalog, there were a couple of deep cuts that the band performed throughout the evening.  Telling the crowd they were going to slow it down a bit, they then performed a song, “Running From The Rain”, that Rickly said the band had always loved but had never played it live.

Although the band has had some setbacks with Covid canceling live music for a while and Rickly’s broken foot, he went onto say that while it may be a stupid time to tour, they love it so much and believe in music and feel that people really need it, especially now.  They then performed “Standing On The Edge Of Summer”, dedicating it to their friends in The Appleseed Cast.  Rickly then said that they had Norman Brannon from Texas Is The Reason filling in on guitar and that he had saved the tour, asking everyone to give him a round of applause.  The band then performed a Texas Is The Reason cover.  They “closed” the show with two songs from Full Collapse, “Autobiography Of A Nation” and “Understanding In A Car Crash”, which saw the crowd go crazy!  Rickly thanked everyone for coming out, including those who maybe didn’t like the band so much but came with their significant others, or were someone’s ride, or came for the openers but stuck around for Thursday.   Saying that this was the point in the show where they would leave the stage and people would clap and the band would come back out, he went on to say that with the state of his foot, if he left the stage he wasn’t coming back out (with a laugh!), saying they would go ahead and go right into their encore if that was alright with everyone. Starting the encore with their second deep cut of the evening, “Autumn Leaves Revisited”, they closed out the show with “War All The Time”.  They definitely left the crowd buzzing and full of good energy as the music ended!  It was a really fun evening of good music and plenty of sing-alongs!