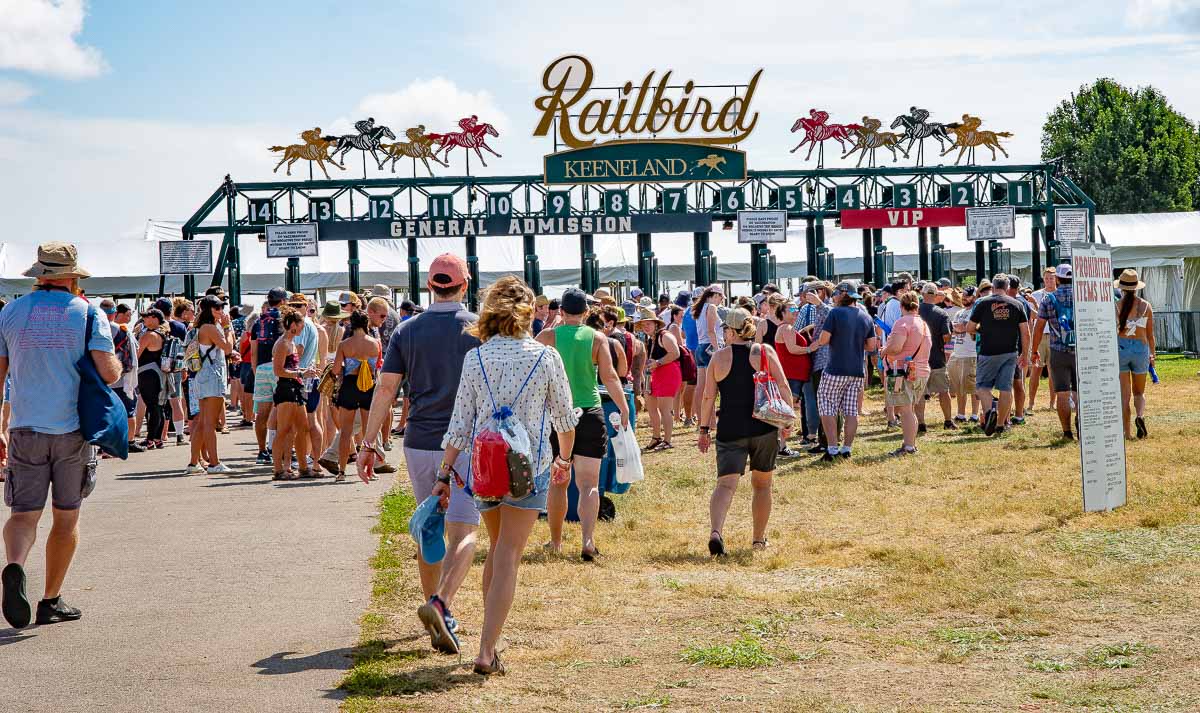 This past weekend, Railbird Festival happened in Lexington, KY at the beautiful and historic Keeneland Racetrack grounds.  With beautiful and lush green grass and rolling hills, it is a beautiful location for a music festival!  Although a large focus of the festival is music, Railbird Festival also provides attendees with unique bourbon and culinary experiences.  Kentucky has many fine, world class distilleries, as well as culinary dishes, both of which festival goers were able to enjoy, giving festival attendees a well-rounded and enjoyable Kentucky experience and displaying much that Kentucky has to offer!  Having debuted in 2019, this year was the festival’s sophomore year after taking last year off due to Covid.  In a unique year for large scale music performances, many festivals are navigating uncharted waters.  As with many festivals this year, Railbird attendees were required to show proof of vaccination or a negative Covid test (within 72 hours of attending) which were checked at the gate, with those working the gates giving attendees special wristbands upon entry.  Despite the special requirements, this year’s sold out crowd were lined up outside the gates, eager to get their weekend of fun and music started!  Just before gates opened, the call to the post was played on a trumpet, which typically is played at the start of the horse races, to signify the start of the festival, with the crowd cheering and clapping.   One thing that was apparent from the start of the weekend was that attendees were in for a HOT couple of days.  Although Lexington narrowly missed the incoming rain from Hurricane Ida, the weather was hot and humid, with water stations getting heavy usage throughout the weekend.  This year saw a larger crowd than in 2019, with the festival grounds expanded this year to hold a larger crowd of people.  There were also a larger variety of food trucks/food stalls that offered a wide selection of food, from noodles to falafels to burritos to pizza and everything in between!

The great thing about this festival is that you can see smaller, local bands, as well as larger, more established artists.  Day 1 started out with Eastern Kentucky musician Nicholas Jamerson, who was in high spirits and excited to be performing live for the fans who had showed up early for his set.  The day also saw performances from artists such as Black Pumas, local favorites Bendigo Fletcher, Margo Price, Leon Bridges, Midland, Japanese Breakfast, Billy Strings, and My Morning Jacket, to name a few.  Black Pumas, who have surged in popularity since winning a Grammy for their most recent album, gave an exhilarating performance, with singer Eric Burton jumping around the stage and going out into the crowd early in the band’s performance, much to the delight of the crowd!  Singer Joy Oladokun told a story early in her set about having been a child during the Rodney King protests and having the same things happening all of these years later with George Floyd, but how she still held out hope for the future.  As the day wore on, the crowd started to get thicker and thicker, with fans packing into the festival grounds to check out the bands.   Headlining this evening was Kentucky favorites My Morning Jacket, with the crowd packing the main stage area to dance and sing along to the local favorites!

Day 2 had a bit of a slower start, with many people trickling in at a slower pace the the previous day.  Day 1 had some hiccups, with many people complaining about the long lines for food, water, and alcohol.  Railbird made a point to address these concerns and took measures to fix many of these problems for day 2, with things seeming to run smoother for the second day.  Day 2 started out with local favorite Grayson Jenkins, a Lexington native.  The Memphis blues and soul band Southern Avenue got the crowd dancing, with singer Tierinii Jackson giving a high-energy performance!  Grammy-nominated Mardi Gras Indian funk band Cha Wa gave and fun and lively performance that had the crowd dancing and singing along, with frontman Joseph Boudreaux dressed in an intricately designed suit and headdress, adorned from head to toe with beadwork and neon green feathers!  Rounding out the day were performances by husband and wife duo The War And Treaty, who were pure fun and energy, The Revivalists, Band of Horses, Khruangbin, and Dave Matthews Band, who closed out the festival!  Throughout the festival, with a few of the bands being from Louisiana, New Orleans and Hurricane Ida were on their minds and in their hearts, with The Revivalists dedicating their set to New Orleans.  Railbird 2021 was a really fun weekend that allowed festival goers to experience the city of Lexington, good music, and good local food and bourbon!  I look forward to next year and am sure many others are as well!  You can connect with Railbird Festival via the following links: