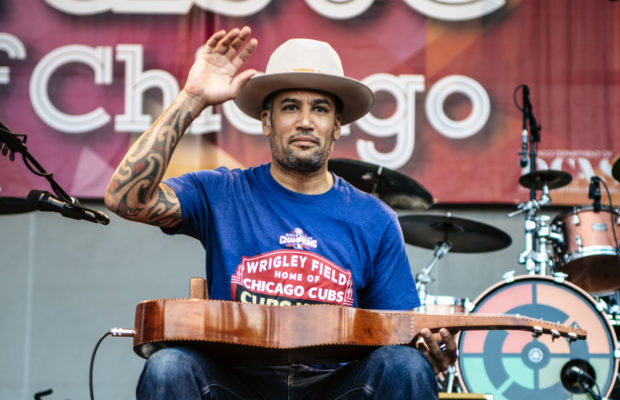 The Taste of Chicago is one of the most anticipated events of the summer in the Windy City. Hundreds of thousands travel to the Loop to eat some of the best food the city has to offer. In addition to great street food and local cuisine, the Taste showcases some of the best and most exciting musicians at the Petrillo Music Shell. This year, the Friday acts were Twin Peaks and Ben Harper, an interesting combination of musicians to put on the same stage.

Twin Peaks are a local rock band and have a pretty fervent following (and not just in Chicago). Their onstage antics combined with alt-rock melodies make them a great band to see at a bar or on one of the smaller stages at Pitchfork. Their energy was a bit off at the Taste, however; the mostly seated crowd of suburbanites and Ben Harper fans threw off their vibe. They did the best with what they had and seemed eternally grateful for the Twin Peaks fans who did come early to see them play.

Ben Harper started off his set with a 12-minute bluegrass guitar solo. Sitting quietly in a “CUBS WIN!” shirt and dapper hat, Harper played a beautiful instrumental with a bottleneck slide and finger picks. With the Innocent Criminals, Harper played “Burn to Shine”, “Amen Omen”, and other hits that fans know and love. The band truly complimented one another, with Harper frequently stepping out of the spotlight to showcase his fellow bandmates.

The weather was perfect, the food was delicious, and the band played on.