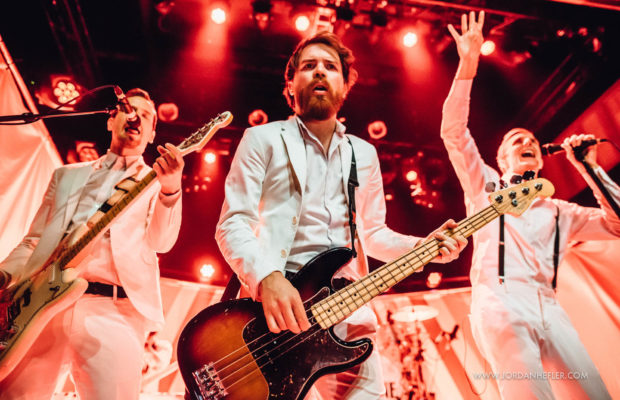 On Friday November 17th, alternative rockers The Maine performed their Modern Nostalgia tour at the House of Blues in New Orleans, Louisiana along with openers Dreamers and Night Riots. The Maine has been a household name in the alternative/indie/emo scene for over a decade, and it seems with each passing year their fanbase just grows tenfold. In addition to having increasingly popular and successful music, they’ve been known to hit the road hosting free shows, emphasize the importance of free meet and greets, support charities with their concerts, plant trees with fans for the community, and just be all around decent people.

Starting the night was Night Riots, a California rock band with an indie/eighties glam-rock edge. Lead singer Travis Hawley effortlessly danced around the stage with a carefree attitude to synth-filled songs with driving ambient bass lines. There was even an interlude where the entire band beat on drums with light up drumsticks in the dark, which was a crowd favorite moment as the entire venue watched in awe. The Night Riots performance was a perfect opening act to get the venue warmed up for the Modern Nostalgia tour, considering their songs are epic, energetic, and atmospheric.

Next up was cosmic rock band Dreamers, quite the fitting segway from the Night Riots performance: Both bands have an incredibly nostalgic sound reminiscent of 80’s dance pop with an indie twist. However, where Night Riots might have been more glam-rock, Dreamers had more of an alternative rock feel. On stage, this band had an authentically raw presence. Bouncing around the stage and swaying microphones hanging dreamcatchers side to side, Dreamers had the whole crowd bopping their heads and singing along.

Lastly, The Maine packed a punch with their headlining set, complete with a Beatles-esque intro and setup on stage. The band was known to wear all blue suits during their tours promoting the 2015 album American Candy, but starting off this set for their latest album Lovely Little Lonely the band looked crisp in all white 2 piece suits. It was evident that The Maine had thought of every single detail for their set production, from the red carpets to the roses on the ground to the Beatles font on the drum kit. All of this attention to detail made their performance incredibly unique, memorable, and picturesque for concertgoers. The band played Lovely Little Lonely in its entirety with barely any time to spare between each song. Lead singer John O’Callaghan had a little bit of witty banter in between songs, mostly talking about how great New Orleans is to visit and reminding the fans that it’s okay to not be okay, but to make friends and support each other. After a short intermission with The Beatles, The Rolling Stones, and The Who piped in through the speakers, the band re-emerged in their 60’s looking boy-band blue suits to perform American Candy in its entirety. Ending on the uber nostalgic song “Another Night on Mars” the crowd went wild belting out the words, putting arms around each other, and swaying left to right. It was very apparent that The Maine genuinely enjoyed performing these two albums and that they have immense respect and love for their fans. In an industry so convoluted, it’s great to know that there are still people so caring and authentically excited about their musical influence as The Maine.