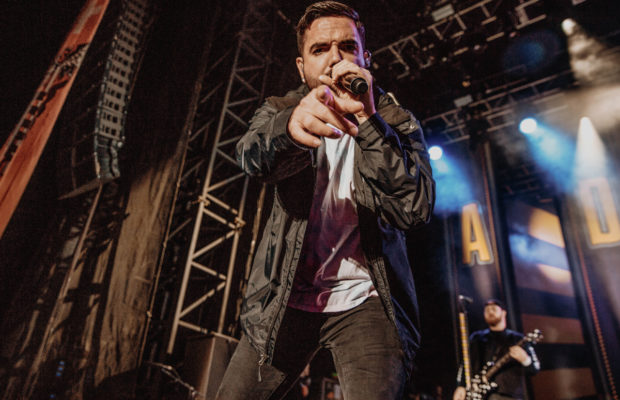 The Festival Pier at Penns Landing

For those of us who can’t seem to get enough pop-punk on Warped Tour every summer — fear not, A Day To Remember feels your pain. That’s why they brought their Self Help Festival to Philadelphia’s Festival Pier this past weekend. Though it was the first time this festival was happening in Philadelphia, it still was a killer experience.

The day was jam packed with energetic live music. The doors opened and the nearly sold-out venue began to fill up. Microwave took the stage first, opening the smaller B stage to the left of the venue. Circulating a large fan base on Warped Tour this past summer, the crowd was going insane for Microwave. The energy didn’t die down for a second throughout the entire day — to be honest, I was kind of surprised.

The good thing about Self Help Fest is that, much like Warped Tour, you’re able to experience tons of new music from bands that you may not have known you even liked. Such is the case for Angel Du$t who blew the roof off the main stage in the early afternoon. Literally, we were kicked out of the photo pit after two songs because the crowd was so crazy! As bands graced stage after stage and played killer performance after killer performance, the sun began to set and it was becoming time for the big hitters.

Falling In Reverse, Underoath and A Day To Remember were the three bands that came together to close out Self Help Festival. Although Falling In Reverse suffered a minor hiccup after Ronnie Radke threw a fit because the crowd wouldn’t sit down as he was instructing them to do at the beginning of their second song — the night continued on. Underoath played one of their strongest and most energetic performances I have seen in a long time. Watching from side stage, I was able to see the passion pour through each and every member of the band and the crowd was feeling it. By the conclusion of Underoath’s set, the fans’ blood was pumping and they were ready to throw it down with A Day To Remember.

The lights went dim and ADTR’s intro song came on before the crowd erupted into cheers at the band members graced the stage, began playing “All I Want” and the confetti canons exploded into the air. The festivities had begun. ADTR put on a high energy and extremely strong performance on Sunday night with lead singer Jeremy McKinnon leaning into the lenses of every camera beneath him and often times coming out onto the stacked amps to interact with fans in the very front rows.

Self Help Fest was a day full of fun and festivities that I never want to forget. With such a strong lineup of talented bands, I’m excited to see where this festival goes in the future. For now, those of you in Detroit, Orlando and San Bernardino need to get your tickets now because when this festival comes to you — it’s not something you’re going to want to miss!