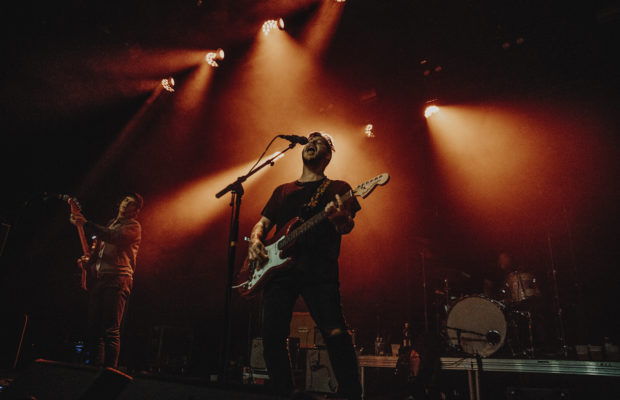 With the kind of music that I listen to, I’m telling you that I was meant to be in a garage, jamming out for the rest of my life — listening specifically to Wavves. They’ve been one of my favorite bands for a while, so it’s no surprise that I was rearing to go on Thursday evening when they brought their headlining tour to East Williamsburg, Brooklyn’s newest venue, Brooklyn Steel, with Culture Abuse.

I’m going to be honest, there was very little that I knew about Culture Abuse before this concert. But I find that going into a show absolutely clueless and coming out of the show a fan is always the best. That’s exactly what happened on Thursday night. Standing in the pit as the lights dimmed, the crowd was getting amped up and the fans in the front row began chanting for Culture Abuse. The band graced the stage and began to play a cover of The Clash’s “Police On My Back”. The music was loud, it was heavy, but most importantly it was fun. The barricade was shaking and lead singer, David Kelling, broke out into a happy dance of sorts. Between songs Kelling gave a heartfelt speech about living with Cerebral Palsy, being different and learning to say “fuck it” and be ourselves. Culture Abuse then plunged iinto the remainder of their set, flipped their hair across the stage and banging the drums, hard. It was clear that fans did not want the set to end, but at the same time, the anticipation for Wavves’ arrival was growing.

I couldn’t see a single fan that wasn’t sipping on their beer between the sets, as puffs of smoke began to pop up throughout the crowd. It was time for Wavves. Cheers erupted as lead vocalist, Nathan Williams, and his band walked onto the stage. Slinging his reed Fender guitar over his back, he grabbed the microphone and shouted “BROOKLYN!” into it and the crowd went wild. I hadn’t seen Wavves since their last show in New York City at Terminal 5. So when they began to play “Way Too Much”, my blood was pumping. Suddenly it felt like I was taken back to California this past summer. The music of Wavves is always so high energy, so seeing them live is always so damn fun. Honestly, I saw my life flash before my eyes in the photo pit as the barricade shook from the energy of the crowd pushing against it. Wavves played a lengthy set that included favorites both new and old like “Animal”, “Million Enemies” and their hit “Green Eyes”. What is perhaps my favorite part of any Wavves show is 1) watching bassist Stevie Pope Jr flip his hair all over the place as he dances back and forth across the stage and 2) the energy of the crowd is so soothing and makes you forget about everything else, even if just for that moment.

I can’t emphasize enough that Wavves is one of the best bands in the scene right now, from their music to their energy — get on the bandwagon now and Go. See. Wavves.