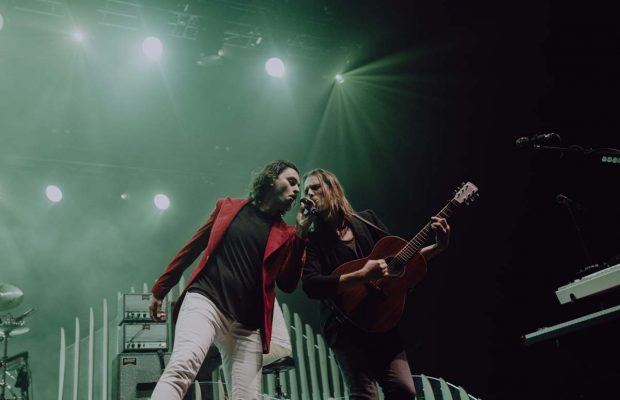 The Head and The Heart with Hippo Campus

On July 12, The Head and The Heart headlined Toyota Music Factory in Irving, TX on their Living Mirage tour. The show opened with Hippo Campus, a band from Minnesota that has accumulated a cult following and is still touring their sophomore album, Bambi, which was released in September of 2018. Recently, Hippo Campus have been releasing a series of demo albums, taking their fans behind the scenes of making Bambi. Demos II had released two days before this show, and the band played two of the previously unreleased songs that now had released demos, Chapstick and No Poms. Although the boys of Hippo Campus are used to headlining venues such as Cain’s Ballroom, having the opening slot of an amphitheater tour like this has brought the band many more fans, as they played their catchy songs including Bambi, South, and Buttercup.

The Head and The Heart then took the stage, opening the show with Living Mirage, the title track of their fourth full length album that was released back in May. The band played songs from all of the albums, including a five song encore that featured their hits All We Ever Knew and Rivers & Roads. At one point during the set, Charity Thielen noticed one fan who had been holding his vinyl record in the air for the entire set. She called him out on it and he stated that he was trying to get it signed for his girlfriend. Charity took the vinyl and got the band to sign it and also brought the couple on stage to help play the tambourine and shaker for a song. The Head and The Heart’s production elements were quite simple, but there being six band members fills the stage. The wooden slats that decorated the risers that three of the band members played on perfectly complemented the lighting design that portrayed the aesthetic of the album. The Head and The Heart put on an emotional, fun, high energy show and I encourage everyone to catch one of their shows.