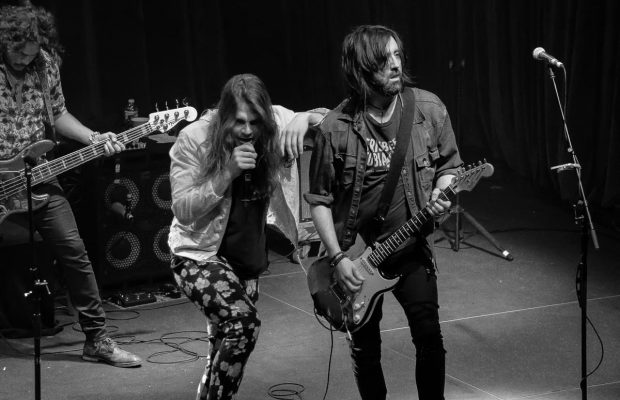 The Glorious Sons with The Dirty Nil

Canadian rock band The Glorious Sons have been blowing up the charts in their home country since forming in 2011.  Having performed several tours and festival dates, such as Carolina Rebellion, Northern Invasion and Rock on The Range, they have been generating a buzz and have gained a solid fan base in the US, as well.  They performed recently in Louisville, KY to a modest but passionate crowd of fans.  It’s easy to see why their fans are drawn to their music and live performance, as singer Brett Emmons has a whirlwind of energy on stage.  The band hit the stage this evening to a roar of applause and cheers, with Emmons making full use of the stage throughout the set to dance, interact with his fellow band members and to interact with the crowd.  There were several times throughout the evening when he would shake a fan’s hand and acknowledge them while singing, holding the microphone out and prompting the crowd to sing along.  It was a very engaging experience for the crowd.  Performing hits such as “Mama”, “White Noise” and “Kill The Lights”, the band elicited perhaps their biggest crowd reaction of the evening when they sang their hit song S.O.S. (Sawed Off Shotgun).  They put on an incredible performance that was full of energy and fun and kept the crowd dancing and singing along all evening!  Fellow Canadian rockers The Dirty Nil opened the show and put on a fun and high-energy performance that got the crowd warmed up for the night ahead.