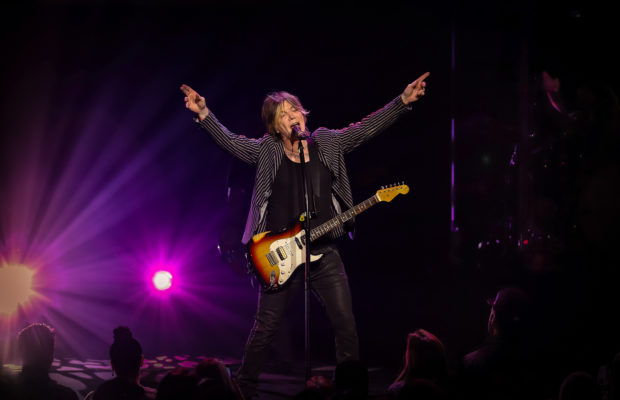 The Goo Goo Dolls are currently touring the US to celebrate their “Dizzy Up The Girl” album turning 20 years old. Their shows are being held in smaller, more intimate venues across the US that sold out immediately when they went on sale earlier this year. They are playing two sets. Set number one is the “Dizzy Up The Girl” album in its entirety and the second set is a “deep cuts” set.

Buffalo welcomed their hometown boys with screams and clapping, when Robby and Johnny came on stage for the first of their three sold out shows at the Shea’s Theatre. They are being joined on stage by Brad Fernquist on guitar, Jim McGorman on keyboards, as well as Craig Macintyre on drums.

They started off performing “Dizzy” in its entirety. During “Black Balloon” about a hundred black balloons floated through the audience and they must have made for a spectacular view from stage.

No costs were spared for these special three performances and the band invited a string quartet on stage during a couple of the ballads. These shows were videotaped and I have feeling they will be available in DVD/BlueRay in the near future.

After finishing the first set, John Rzeznik came back on stage for a three song solo performance, bantering with a prerecorded version of himself on a video screen, who helped him sing and play guitar before the rest of the band joined him back on stage to continue with the second set.

After a solid 2 hours  they left the stage and the audience was left wanting more. The setlist for the first two nights has been  identical, so here’s to hoping that tonight’s show will hold an extra surprise to finish off this amazing 3-night run in Buffalo.