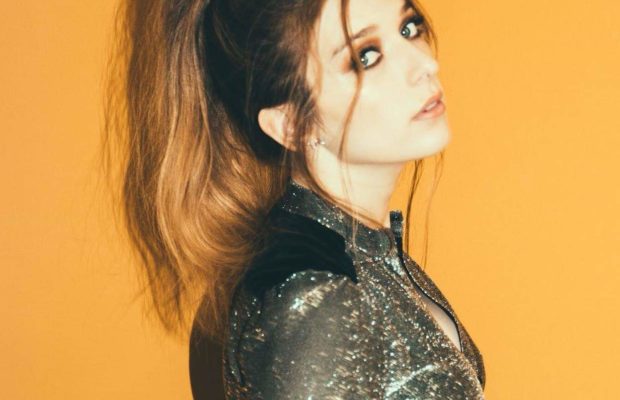 I’m Kelsey Byrne, better known as her persona VÉRITÉ (stylist in all caps) isn’t just your typical D.I.Y music lady. A true independent artist that can only create out of self-motivation and the her true desire to become whatever she’ll become. After releasing her debut album Somewhere in Between Vèritè has been busy keeping herself busy. As both a business woman and an artist the twenty eight year old singer songwriter from New York is confident and cool but honest and humble. There isn’t any front with Vèritè, she’s not an open book but she’s someone who wants to be heard. I can’t help but feel a little intimidated at first as she’s sits across in shades after her Austin City Limits set but that soon changed once we started talking.

How was your set today? I know the festival got delayed a bit.

VÉRITÉ: The set was great. I was a little nervous about thunderstorms, as usual but people were there and honestly it was great. I’m really fucking happy.

While researching your last night there’s many times were you reference feeling like an underdog, does performing big events like ACL really change the for you?

VÉRITÉ: For sure. I think especially being billed on a festival and getting a good set time on a great stage. For me it really legitimizes what I’m doing and I’m trying to build. I released my album over a year ago. It’s really good to keep that process moving. In this interim period things are still moving.

Are there any acts here that you’re excited to see today?

VÉRITÉ: I don’t know, I’ve been so entrenched with playing and doing press today that I haven’t really thought about it. Next Friday I’ll be back and hopefully I’ll get to see some performances?

You’re very empowering when you speak. You strike a great balance of this creative person meetings a serious business women. Where does that come from?

VÉRITÉ: I think I was born to compartmentalize those two sides of myself. So it’s been interesting process just bouncing back and forth. It’s something that I can do kind of easily. If anything it’s coming back to being creative is harder for me than focusing on the back and white business side.

You don’t seem like a selfish creator. You collaborate and cover a lot. Even though the industry is very competitive.

VÉRITÉ: I think for everything I do has been based on a gut feeling. All the cover I’ve done are because I was working on other music and I hadn’t released music for a minute. It just felt natural process to kind of share things that I love and reinterapte. them with others. And for me finding really amazing artist to collaborate with, recently it’s been Hell, Allie X, and Matt Mason and I think I have one more that’s coming out soon. I don’t know I want to be inspired by other people and that helps me.

You’ve learned a lot of about the music do you ever see yourself doing anything else in the industry besides creating for yourself?

VÉRITÉ: No, I think that I never really knew what I wanted to do. Again going back to that gut-reaction I’m constantly moving forward. This is kind of that path that I feel like was laid out for me. So I just keep walking down it.

VÉRITÉ: The rest of this year is really writing. I’m going to Sweden and LA. I’m writing alone in a cabin. Just trying to get all the angles and perspectives that I can get?

Writing alone in a cabin? What’s that going to be like?

VÉRITÉ: Oh I’m going to have a nervous breakdown. A positive one.

VÉRITÉ: I want to have a nervous breakdown. I’m like overdue for one.

I actually really understand that. Like I said I was researching you and there’s a part of your story and your work that really speaks to me. Are you familiar with imposter syndrome?

VÉRITÉ: Oh yeah for sure.

Do you think you’ve ever deal with that?

VÉRITÉ: Yes for sure. Imposter syndrome is a bitch. But I think again, there are all of obstacles can come in your when you’re trying to build something and I think the excise is to take action regardless of how you feel, which is how I try to live myself. Because if I took action based on how I felt then I would just be in bed all day.