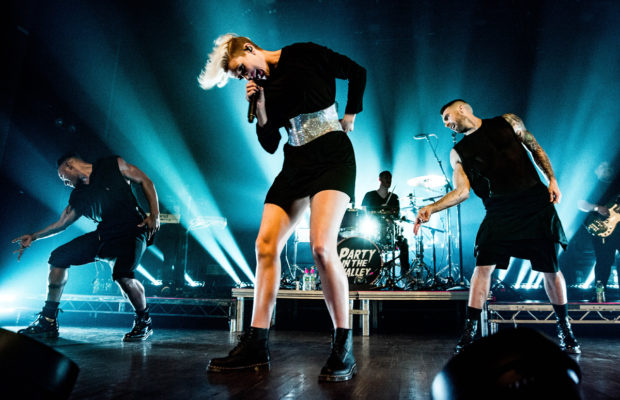 The genre of pop music has arguably started to become homogenous, thus the reason all of your friends say “Oh it’s all so generic” every time they listen to the radio. However, there are two powerhouse young females that are making waves in the pop industry and Webster Hall was lucky enough to have both of them grace the stage on Friday night for a homecoming celebration of sorts. On the second night of the Part In The Valley Tour, Betty Who and Vérité set off sparks of energy inside the historic venues walls and make sure to make it one of the most memorable Friday nights.

Kelsey Byrne, known better by her stage name Vérité opened up the evenings festivities. Her minimal two person live band (three including her) captivated the sold out crowd and definitely garnered some new fans. She opened her set with her newest single “When You’re Gone” from her forthcoming debut album Somewhere In Between. Prancing from stage left to stage right, Vérité showcased her magnificent set of pipes. Even partially hidden behind her intricate keyboard setup at stage right, Vérité commanded attention. Her brief but powerful setlist included songs both new and old like “Weekend” and “Phase Me Out”. What stood out as perhaps my favorite part of her set was halfway through when I was struck by the opening chords of “Somebody Else”, her astonishing cover of the The 1975’s hit single. If you ask me, her cover is a force to be reckoned with and even puts up a good fight against the song itself. After the conclusion of her final song, Vérité parted ways with her hometown crowd as the stage was cleared for the arrival of Betty Who.

Australian born but New York City based Jessica Anne Newham, who goes by her stage name Betty Who, released her sophomore record last month and was bringing the live performance to New York City for the first time. Fans of all walks of life gathered around the stage, some pouring out the doors, fighting to get whatever glimpse of Betty that they could. The lights dimmed and the intro and title track to her record “The Valley” flowed through the venue. The crowd erupted in cheers as many people were bursting at the seams to hear Betty Who’s new music live for the first time. Betty Who started with “Glory Days” before rolling into the optimistic pop anthem “You Can Cry Tomorrow”. Betty took command of the entire 1,500 capacity venue with her strong vocals and stage presence. Donned in a short black dress and edgy Doc Marten boots, Betty Who and her two back up dancers recited their dance moves step by step, blowing the crowd away. Betty Who played a stacked, nearly 20 song setlist that was filled with new and old songs as well as the pop hits and lesser known acoustic tracks like “California Rain” and “Wanna Be”. Who ended her set with “High Society” before retreating backstage for a brief break before the entirety of Webster Hall was demanding her return for one more song. Betty returned to the stage and delivered the excited crowd with not one, but two more songs to conclude the evening. Who played what is one of my favorite tracks of hers, her cover of Donna Lewis’ “I Love You Always Forever”, before spiraling into her hit single “Somebody Loves You”, that pounded through the airwaves after a viral video in in 2013.

Both Vérité and Betty Who prove that pop music is not dead and it’s not turning into a homogenous track producing machine. Their diverse and refreshing pop songs make it impossible not to smile and dance throughout your house while listening to it. Betty Who is a singer, dancer and all around amazing performer who takes command of the stage and makes sure to get every single person in the venue off their feet. It will be amazing to watch as she goes on to achieve great things.