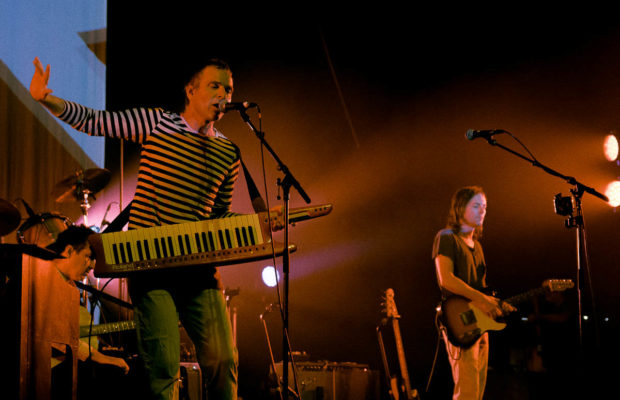 Belle and Sebastian with Julien Baker

The Scottish Band Belle and Sebastian performed in Louisville, Ky recently to a packed house.  Although the city saw a torrential downpour the couple of hours leading up to doors, that didn’t stop a few diehard fans from lining up early to get a good spot up front.  The crowd was on their feet from the moment Stuart Murdoch sang his first note, with the band performing a nice variety of songs from their catalog.  The band was in good spirits, with Stuart Murdoch explaining how they have a lot of songs about troubled females.  This led to some friendly banter between him and band mate Sarah Martin on whether boys or girls are more trouble!  He also told the story of how he met his wife and how they bonded over baseball and Mike Piazza.  Belle and Sebastian is a multi-instrumentalist band and had an incredible stage set up, as well as stunning lighting throughout their set.  In additional to the array of colorful lighting that danced across the stage, the band also had a screen behind them that displayed various images throughout the night.  Towards the end of their set, they had several members from the audience come on stage, where they proceeded to have a West-Side Story dance showdown.  Belle and Sebastian put on an incredibly entertaining live performance and gave the audience a fun and memorable evening!  The amazing and talented singer-songwriter Julien Baker opened the show.