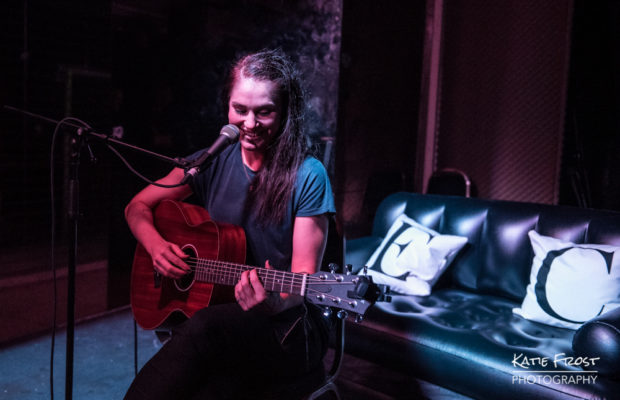 Thursday was the fifth night of the “Feels Like Home” UK tour featuring Charlotte Eriksson (aka The Glass Child), Emma Buckley and Esther Turner, plus local support Foxpalmer. The eight-date UK tour has a deliberately homely vibe, and featured a sofa with cushions adorned with the initials of Charlotte and Emma. These little touches perfectly set the scene for the intimate evening ahead.

First on stage was Fern McNulty aka Foxpalmer who, accompanied by fellow musicians Jonny Ryan and Georgia Patterson, did an expert job of opening the show. Fern announced to the room that she had recently quit her “shitty day job” to concentrate on her music full-time. If her performance tonight was anything to go by then she has definitely made the right decision! Her songs were a glorious mix of soulful rock and folk.

Next up was 21 year old singer/songwriter Esther Turner from Birmingham who taught herself to play the guitar, piano and the drums and has supported the likes of The Jacksons, Justin Bieber, Ed Sheeran and Katy Perry. Esther’s bubbly personality and infectiously catchy songs really got the room going. Particular highlights for me were her latest single “Tell Me Straight”, and her last song of the set “Tequila”.

Main support for the evening was Londoner Emma Buckley who treated the crowd to tracks from her recently-released Don’t Tell Me debut EP as well as a gorgeous cover of “Songbird” by Fleetwood Mac and an outstanding rendition of “What’s Wrong” by 4 Non Blondes. I have to confess that her song “They Need You”, dedicated to Liverpool veterans, had me very close to tears. Emma’s songs are full of raw emotion and her performance had everyone in the room transfixed.

Headlining this evening was Swedish-born Charlotte Eriksson aka The Glass Child. Hailing from Gothenburg, Charlotte left home at 18 to pursue her dream and dedicate her life to her art. To date she has released 6 EPs and 3 full-length albums, all through her own record label Broken Glass Records. Charlotte is not only a songwriter but also a freelance writer, having published 3 books, telling the story about life as an artists and travel essays about love and loss. Charlotte played a wonderfully engaging set featuring songs from her back-catalogue including “Hypnotic Jerk” and “The Fall”. She also played her latest single “Coming Home” which was written about her hometown of Gothenburg. She describes the song as being about “the wonderful curse of being destined to leave and wander, and the strange feeling of going back again after moving out into the world to chase your dream”.  Before the show I sat down with Charlotte to chat about music, writing, traveling and how all three have influenced her. Check back soon to read all about it!