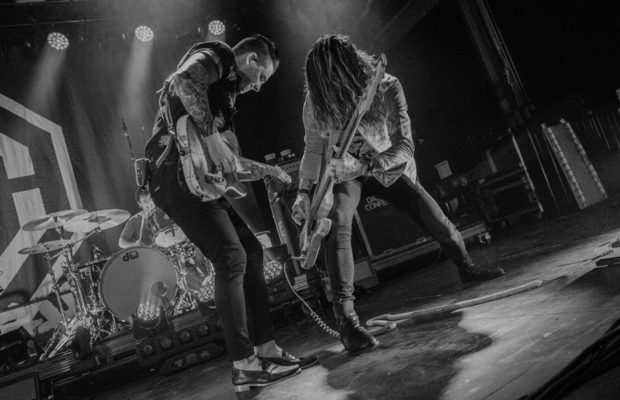 Some of you might roll your eyes at this and become overwhelmed with a feeling of old age, but I was just about three years old when Florida-based alternative rock band Dashboard Confessional united and released their debut music. Since then, the band has released several albums and have spread themselves over an array of different musical genres and influences. Almost two decades have passed since Dashboard Confessional first stormed onto the scene and it is a blessing that they are still selling out shows like Thursday night’s show at Brooklyn Steel in New York City. Dashboard, who have said in many interviews that they are big supporters of girls in the music industry, brought along two Philly bands that were heavy on the female presence.

I do have to give a disclaimer: being originally from Philadelphia and a female in the music industry, I was ecstatic for the shows lineup. The first band on the bill was called Kississippi — a project by Zoe Allaire Reynolds that began in 2014. Reynolds entered the stage solo for the first song before the remaining four members of her band joined her for the rest of their set. The band played a half hour set and captivated the audience. Looking around the venue, though not completely full, you could tell that people had discovered a new favorite band and kept wanting more.

The same went for Beach Slang — another Philadelphia based band that I had been waiting ever so patiently to get to see for the first time. Lead vocalist James Alex wore his finest beat up white vans, paired with a ruffled white shirt, red bowtie and blue corduroy suit jacket. The band played an effervescent live set, their stage energy is incomparable to anything in the alternative genre. Alex would take breaks from singing during the chorus to stand back and exaggeratedly strum his guitar, swinging his right arm in a giant circular motion.  Beach Slang knew the challenges of being an opening band, addressing them towards the end of the set where Alex said “We’re gonna win you over Brooklyn! We’re gonna crack you!” And crack the audience they did with their roaringly popular 90’s alternative rock cover medley featuring Third Eye Blind and Smashmouth. The band said goodbye to the crowd as Alex picked up his drink by his teeth, chugged it and then spit it all over the crowd — in true rock n’ roll fashion.

The time had come for the band that the majority of the completely sold out Brooklyn Steel had been waiting for. Dashboard Confessional was going to be coming on the stage at any given moment; the lights were dim and it was quiet throughout the venue. Out of stage right, lead vocalist Chris Carrabba came walking — acoustic guitar in hand — towards center stage. After a swooning acoustic ballad, the remaining members of the band graced the stage and the energy within the venue went from 0 to 100 in a matter of seconds. Bassist Scott Schoenbeck was *literally* jumping around on the stage and all of the mid to late 20 year olds — maybe some in their 30’s — we’re dancing around like they were 15 years old again. Dashboard Confessional played a lot of songs during their set at Thursday night’s show — enough to cater to each and every type of Dashboard Confessional fan — both new and old. It was a real treat!

Standing on Brooklyn Steel’s stage on Thursday night, it was clear that Carrabba was also emotional about selling out the venue and stated that he felt truly honored to still be making music, touring the world and selling out venues after almost 20 years of being a band. Carrabba is right! In this day and age, with the volume of bands, musicians and overall music that our society consumes, the life span of a band, especially a band in the pop punk/alternative rock genre, is not very long so Dashboard Confessional are truly defeating the system! The bands “We Fight” Tour has just begun and will be exploring North America for the next month — check out the show when it comes through your town!