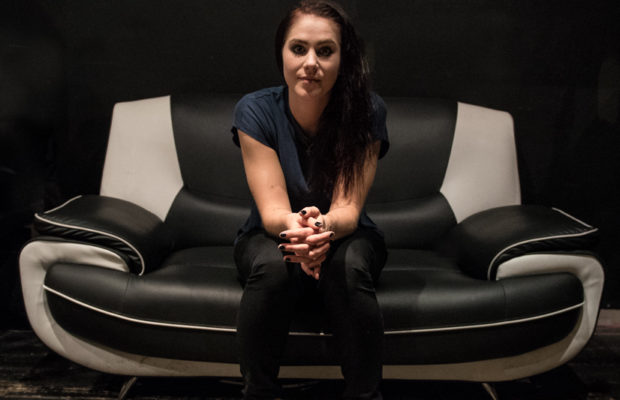 Ahead of her show at Surya in London last week, Katie Frost sat down with Charlotte Eriksson (aka The Glass Child) to chat about writing, wanderlust and her brand new single.

Your latest single “Coming Home” is about your hometown of Gothenburg in Sweden. From a young age you have lived in a variety of places. Have your travels and experiences in living in different cities influenced your writing?

Oh a lot! I think first of all I am probably quite a restless person so I live somewhere until I feel I have experienced it and then I feel like I need to go somewhere else. I have written three books now and all of these books have been about places I have lived. I think my music is influenced by my travels in the same way, but I can only see that afterwards; not at the time when I am writing it.

Do you find that there is a different music scene in different cities or different countries / that you are received differently?

Yes definitely, especially in different countries. First I was in England and then I moved to Germany and these music scenes are complete opposites, I found, both when it comes to how the industry is organised but also how my music is received. It is actually quite inspiring because it brings out different sides of me; when I lived in Germany I had to focus on a different part of my artistry than I do here in England. What I like about England is that it feels like independent artist are very accepted and in Germany they are not very accepted, so it is nice to be back here!

Which has been your favourite city to play in so far?

Edinburgh is probably my favourite city. I played at the Voo Doo Rooms there last summer and that was really special.

Is there a venue where you would absolutely love to perform?

I don’t have a big place that I would like to play, but I have this dream of playing in a cathedral one day and I would like it to be very stripped-down; so maybe a piano and a cello maybe and candles everywhere and everyone sitting down.

Which of all the places you have lived so far feels most like home to you?

This is what the new single and EP [Coming Home] is all about – I have learned to not build homes in cities but instead find my home in the moment. I have felt that every single night of this tour; I feel lost during the day but then every night when I am on stage and I get to sing for people I feel at home.

Are there any other cities / countries that are on your list to live?

Right now I have just moved away from Germany so I am living nowhere right now – I am trying to figure out where I want to live. I have Amsterdam on my list, I would love live there because I think it is a beautiful city and people are so friendly. I also love Prague; I think it is a wonderful place to be, and lately I have been really intrigued by Portugal. I would also love to go to Canada, Australia too but that is further down the road.

You are not only a songwriter but an author. How does the writing process differ between the two?

My book writing and the writing that I post on line are my hobby that just turned into a proper thing too, while my music was something that I wanted to pursue. When I produce or write a song I am very dedicated; I work on that the whole day and then, when I feel like I have done enough for the day, I stop and I write as that is what I do for myself. Writing books comes more naturally, I am not so dedicated to it, it just happens very naturally.

I work on a record for 6 months or so; I write and produce it and then try to bring it out, and after that cycle the last thing you want to do is go back and write a lyric because you feel like you poured everything into that record, so that is when say to myself that I am going to rest for a bit and then I write a new book, and when I have done that I am inspired to make a new record. I couldn’t do one without the other.

For people who are new to your music, how would you describe your sound?

Genre-wise I am usually labelled something like alternative pop or ambient, but I play my live shows acoustically, so I guess it is more acoustic pop. I always try to push my production a lot and change it up with every record; my songs are built around my stories and then I build the production as an atmosphere around those stories.

Who are the musicians who have influenced or inspired you?

So many! The first band that I discovered when I was very young was Counting Crows – I heard their “August and Everything After” record and just fell in love with music. I hadn’t been into music at all before that. Through those songs I was really intrigued by the craft of songwriting and wanted to create songs like that. I also listened to Ani DiFranco; she was probably the first female vocalist that I listened to, and I think I learned how to sing by singing along to her songs!

Who would you love to support on tour?

A dream would probably be Ellie Goulding – I think she is amazing and she is playing huge shows! Also Bright Eyes or Damien Rice maybe, someone like that.

You have just released a new single “Coming Home”. Is that taken from a new EP?

Yes, it is the first single and title track from my new EP “Coming Home” which will be out in a couple of months. This whole EP is about the concept of finding your home out on the road. It is a little different from my other records because this one is more up-beat and happy!