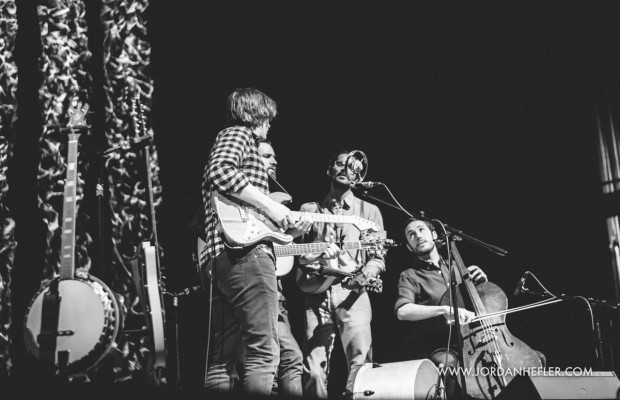 On December 7th, Darlingside performed at Baton Rouge’s premier entertainment venue, Manship Theatre at the Shaw Center for the Arts. Darlingside’s music is hard to classify into one genre, as it encompasses skillful vocal work with bluegrass sounds, while echoing psychedelic sixties pop music. Think Beach Boys and Simon and Garfunkel meet Mumford Suns and Sufjan Stevens, all at the same time. The group is unique being that they don’t have a drummer, just a kick drum that is used by one of the members as all four of them sing into the same microphone. A cello, mandolin, violin and banjo all make appearances along with acoustic guitars and electric bass guitar, giving the band a very naked feel on stage. This vibe was a great fit for Manship Theatre, as it is a sit-down venue largely attended by an older, more musically-apt demographic. The talent that Darlingside has cannot be ignored. All four men have extremely beautiful voices, along with great skill on all of the instruments that are constantly being traded out from song to song. They are currently finishing up their tour for their new album released in September, “Birds Say.” You definitely won’t want to miss them if they are coming to your city!