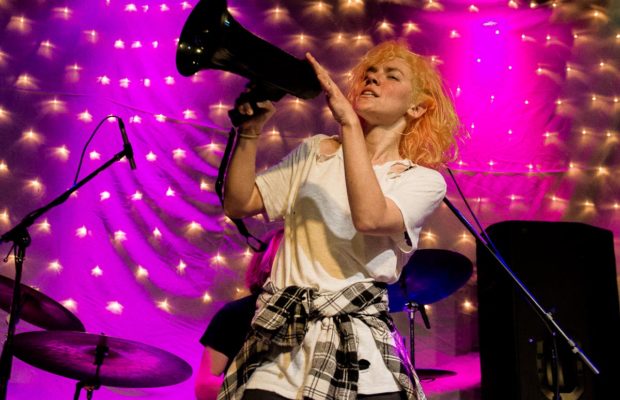 Company Of Thieves with Casey Powell Music and Mutts

After a three year hiatus in which they pursued solo projects, Company of Thieves announced a reunion tour earlier this year, as well as their first new music since 2011’s Running From A Gamble.  The band performed in Louisville, Ky on the second night of their tour to a packed venue of passionate and devoted fans.  Company of Thieves holds a special place in the hearts of so many of their fans who filled the venue with such a warm and joyful energy.  Singer Genevieve Schatz, who founded the band with guitarist/vocalist Marc Walloch, is such a genuine and dynamic performer.  With her colorful curly hair and bright, cheerful eyes she’s a powerhouse on stage.  You can almost feel the emotion that pours out of her as she sings, many of the songs being derived from her personal life experiences.  She’s a very expressive singer, as well, absorbing the emotions of the songs as she sings the lyrics.  Walloch is an incredible guitar player and interacted frequently throughout the night with McCusker and Schatz, rotating the use of his many guitars from song to song.  Starting their set with “Modern Waste”, Schatz, Walloch, Bassist/drummer/vocalist Chris Faller and touring musicians Mike Maimone (keys) and Brendan McCuscker (Drums) played a nice set of songs from both of their albums.  Performing such hits as “Old Letters” and “Death Of Communication”, as well as their first new song in 6 years, “Treasure”, the fans filled the venue with their vocals throughout the evening, singing along with Schatz to every song.  It’s apparent that Schatz, Walloch and Faller have a tight bond and friendship, their interactions with each other effortless and natural.  They, along with Maimone and McCusker, had a lot of fun onstage performing together.  After ending their pre-encore set with “Won’t Go Quietly”, the band exited the stage with Schatz and Walloch coming back out to perform a song together acoustically.  They performed “Fire Song’, a deeply personal song about Schatz’s house burning down as a child.  The only sound you could hear in the whole venue was the sound of the crowd singing.  Ending the set with their hit song “Oscar Wilde”, the band gave their fans a really special evening of music and the reunion tour they had all been hoping for.