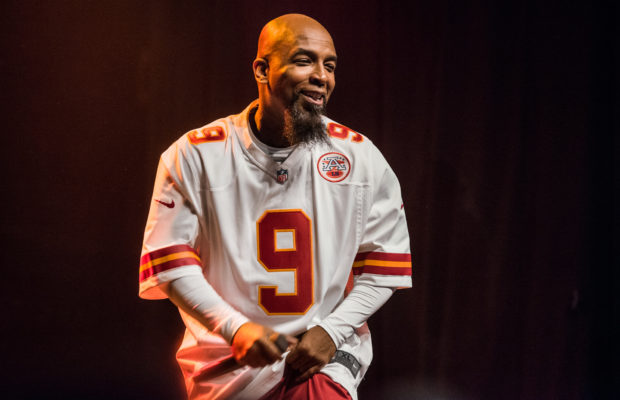 Kansas City’s Tech N9ne performed the fourth night of his Live In Canada Tour with special guest Krizz Kaliko at Toronto’s Phoenix Concert Theatre presented by Strange Music. The “chopper” style rapper brought down the house with his rapid-fire rhyming skills on Sunday night. The show sold out and the venue filled quickly with eager fans wanting to get up close to the legendary rapper.

The stage lit up in red and white lights and filled with smoke as “N9NA” blasted through the speakers and got the crowd hyped up. The lights dimmed and Tech hit the stage, the crowd exploded in cheers, phones out ready to capture the moment he appeared through the darkness. He played an hour and a half long set only stopping briefly between songs to get the crowd to mosh and ask who was seeing him for the first time and welcoming them to Strange Land. He performed all of his hits and new tracks for an unforgettably hot performance.

Artist’s like Tech are few and far between, with a tour schedule as jam-packed as his, he has another 73 dates booked for the first half of this year, he still finds time to release killer music, most recently “I Caught Crazy (4EVER)” and “EDI” off ‘N9na Collection 2’. Since his first album in 1999, he’s released 20, practically one every year, having only taken a small amount of time off between 2003-2005 World domination is inevitable for this incredible performer and extraordinarily talented artist, this is one show you don’t want to miss.

Check out the gallery below for a few of our favourite moments from the show.