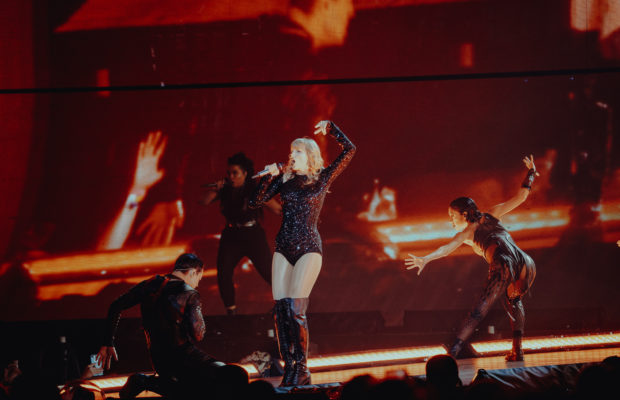 Say my name and everything just stops, belts out Taylor Swift on her song “Dress” from her most recent release, reputation. With her current stadium tour, this rings true, loud and clear. Swift’s Reputation Stadium Tour is one to captivate old fans and new of all ages, and something to solidify Swifts bad-girl, yet good-hearted reputation.

The Reputation Tour made a stop in Detroit on August 28, and managed to blow away no less than 40,000 people with every light, dance move, and note, to no one’s surprise. Swift has always been known for putting on a theatrical show, and one with meticulous attention to detail. With the reputation era, however, Swift and her team have taken this to a new level. With this tour, she has created a living, breathing, fiery piece of live art.

Prior to Swift’s performance, it becomes very clear that this tour has become a means of building connections and inclusivity, and is theepitome of divine feminine energy. Both openers, Charli XCX and Camila Cabello are young women on the cusps of their careers, and though both are pop artists, each was more focused on a different form of their art. Charli’s performance was very techno-poppy and full of bounce, starting with her sprinting and jumping all across the stage for her hit single “Boom Clap,” whereas Camila’s was more moody and soulful as she swayed with her mic-stand, crooning the words to her own tracks, including “Never Be The Same,” and “She Loves Control.” Both ladies put on striking performances in their own ways, and both were so diverse and unique in style, but still so spunky and charismatic, a perfect introduction for a Taylor Swift concert.

Between sets, fans were entertained by a mixture of a custom pre-show playlist (featuring Halsey’s “Roman Holiday,” Sugarland’s “Babe,” Hayley Kiyoko’s “Curious,” among others), and brief clips of fans’ experiences meeting Taylor (at meet n’ greets and secret sessions leading up to reputation) being reeled on the screens of Ms. Swift’s larger-than-life stage. All of this entertainment continuously amped up the energy in the room, all leading to the final song prior to Taylor’s arrival – which was recognized when Joan Jett’s “Bad Reputation” started blaring through the stadium.

Suddenly, in the middle of it all, the lights go black, the stage, a two gigantic screens, begins to light up with flickering, cryptic footage of Taylor over the years – home videos, music video clips, and more, all glitching and distorted in color, with the echoes of news criticism about her. These clips flash forward one after the other, over in seconds, and the room blackens again. The stage parts at the center, filling with smoke and light glowing from within, and then she appears as  her hit single, “Ready For It?” kicks in. Taylor Swift, the woman of the night, is the center of it all, and her show has begun.

For the first few songs, Swift is a force of nature – a hurricane ripping across the stage in a black shimmering bodysuit and thigh high black boots – the armor of a woman who has reinvented herself as something fierce. Flinging herself all over the stage, spinning and dancing and kicking with an army of dancers posed as dragons surrounding her, Swift welcomed the “new Taylor” style so well it was unreal.

Following this, Swift played “Gorgeous,” before taking fans back to the beginning with a beautiful and bubbly mashup of “Style,” “Love Story,” and “You Belong With Me,” while flooded in bright pink lights. Just because the “old Taylor is dead,” that does not mean her music is. Throughout Swift’s set, she made it a point to bring fans back with older hits like “Shake It Off” (featuring her two supporting ladies, Camila Cabello and Charli XCX), “Blank Space,” and even a mashup of “Should’ve Said No” and “Bad Blood.”

Swift’s setlist definitely went back and forth a lot between old and new, a treat for all fans, but the high points were not necessarily always what songs she was performing, but what accompanied these performances. On every tour, Taylor has made it a point to do something special as a thank you to her fans, and on this one, she decided to have a stage layout featuring two b-stages, so that she would have the opportunity to get closer to the back end of the stadium and be able to see the entire room. The biggest b-stage treat for the tour is that Taylor has been choosing an old song, or one that she doesn’t usually play, every night, and performing them for her crowds, a new choice every night. This is where Detroit struck gold, because Taylor decided that their treat should be “Jump Then Fall,” off of her Fearless: Platinum Edition, released a decade ago. Swift told fans she was “pretty sure” she had not performed the track live and acoustic ever, so it was absolutely a peak point in the night.

Another highlight, and one that felt so significant and distinct for Detroit, was that Taylor felt compelled to make a beautiful, heartfelt speech paying tribute to the late Aretha Franklin, a Detroit native who paved quite a way in the music industry. “We lost an irreplaceable force,” she said of Franklin, before discussing the way Franklin had made so much way for women’s rights and civil rights, and done indescribable things for music and the world. Swift then somehow managed to silence a filled-to-the-brim Ford Field. Swift requested a moment of silence in Aretha’s honor, while her stage lit up like the night sky with shooting stars and constellations, and for a split second, the room was so silent one could have heard a pin drop. A minute later, the lights came back, as Swift said “We love you, Aretha,” and then performed a very fitting song, “Delicate.”

Later in the night, when one could easily be convinced the show could not get any better, Taylor brought down the house yet again with her powerhouse vocals. During her performance of “Don’t Blame Me,” right at the tail end of the song, as guitars shredded in the background, Swift sang the line I’ll be using for the rest of my life, and when she sang the word life, it was so strong it felt like an out-of-body experience. Following blowing everyone away with “Don’t Blame Me,” she showed how versatile her music really is, stripping things down at a beautiful tan and ivory reputation grand piano, in a long black and gold dress, to perform the most gentle yet soul-filled blend of “Long Live,” and “New Year’s Day.” After this beautiful piano piece, Swift took her brief intermission, leaving fans with a whole other perspective of reputation with her intermission poem, “Why She Disappeared.” During the poem, the room went dark with only the stage screens lit up, showing Swift wandering in an almost dystopian desert scene, as her voice recited the following poem:

When she fell, she fell apart.
Cracked her bones on the pavement she once decorated
as a child with sidewalk chalk
When she crashed, her clothes disintegrated and blew away
with the winds that took all of her fair-weather friends

When she looked around, her skin was spattered with ink
forming the words of a thousand voices
Echoes she heard even in her sleep:
“Whatever you say, it is not right.”
“Whatever you do, it is not enough.”
“Your kindness is fake.”
“Your pain is manipulative.”

When she lay there on the ground,
She dreamed of time machines and revenge
and a love that was really something,
Not just the idea of something.

When she stood, she stood with a desolate knowingness
Waded out into the dark, wild ocean up to her neck
Bathed in her brokenness
Said a prayer of gratitude for each chink in the armor
she never knew she needed
Standing broad-shouldered next to her
was a love that was really something,
not just the idea of something.

When she turned to go home,
She heard the echoes of new words
“May your heart remain breakable
But never by the same hand twice”
And even louder:
“without your past,
you could never have arrived-
so wondrously and brutally,
By design or some violent, exquisite happenstance
…here.”

And in the death of her reputation,
She felt truly alive.

And as the words she truly felt alive, showed themselves on the screen, the lights went up to showcase Taylor, she herself truly coming alive in the lights for her grand finale. Made up of “Getaway Car,” which showcased almost a sequel to the poem’s scenes, and then afterwards transitioned into “Call It What You Want,” which showcased Swift’s castle crumbling overnight, just as the song says, and then being restored better than ever for her mashup of “This Is Why We Can’t Have Nice Things,” and “We Are Never Ever Getting Back Together.” This ending to her night-long narrative was a wild one, full of energy from beginning to end, as she and her dancers leapt around a fountain and up and down the catwalks, waving and greeting and thanking every person in the room for making the night what it was.

Needless to say, the night was one with memorable moments from the time the show started to after its end, and it is safe to say not a soul left without a smile on their face or some newfound warmth in their heart. As a long-time fan, I say call it what you want, but I’ll call the Reputation Stadium Tour worth every moment.

Stitched Sound would like to extend the greatest thanks to Taylor Swift and her team for the accommodation and the wonderful experience we had at the Reputation Stadium Tour, Detroit.