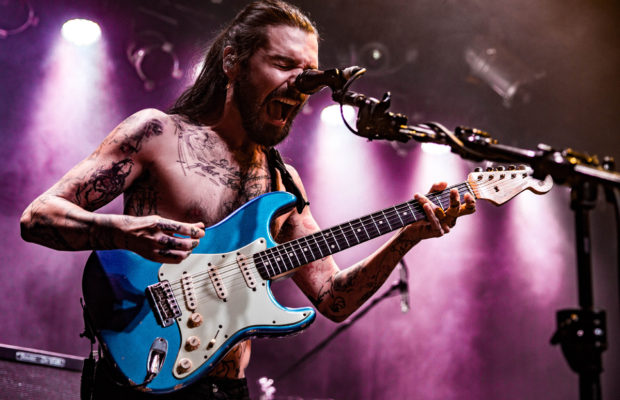 I discovered Biffy Clyro through one of my closest friends just last month. “You’ve got to see this band.” He said “You won’t regret it.” Boy, was he right. Biffy Clyro is one of the strongest and most energetic bands that I’ve ever seen and they put on one killer live performance. They kicked off their Spring US tour at Warsaw in Brooklyn on Tuesday night, bringing along New York natives Spirit Animal to kick off the show.

“Nothing like walking to da club”, lead vocalist of Spirit Animal, Steve Cooper shouted to the crowd. The band, who pride themselves on bring Brooklyn natives brought their high energy performance to Warsaw on Tuesday night. The self-proclaimed “funk pop, psychedelic rock” band played a lengthy 10 song setlist featuring songs both new and old, including “World War IV (To The Floor)”. The highlight of Spirit Animals’ set was during their hit song “The Black Jack White”, in which Cooper recited the lyrics and got the crowd to do the Black Jack White along with him. All throughout the venue people were sticking their arms to their sides and shaking their hands like they went to sleep. Spirit Animal concluded their hometown performance with “Come To Christmas”.

Between sets the crowd began to get amped up for Biffy Clyro’s arrival. The stage techs were tweaking this and that and the occasional guitar strum caused the crowd to go wild. Not before long, the lights dimmed and the sound of angelic choir music filled the venue. Lead vocalist, Simon Neil, and fellow band members Ben and James Johnston graced the stage. In their distinctly Biffy outfits: shoes, pants, no shirts, they stood like statues behind their microphones. The venue went silent and “Mon the Biff!” chants began. It was about to get crazy.

Neil struck his guitar with such emphases, his long ponytail was spinning around behind him. The band opened with “Wolves of Winter”, the epitome of an opening song. The floorboards were shaking inside the venue — the energy was insane. Neil, whose pedal board is always covered with a tarp because of the spraying his does while singing, was no less high energy than any other time. While Biffy may be used to playing massive arena’s in the UK, they make their smaller venues in the States feel like massive arenas. The band played a 21-song setlist, about an hour and a half worth of music, and the crowd did not want it to end. Hit after hit, including “Howl”, “Who’s Got A Match?” and my personal favorite “Bubbles”.

The Scottish rockers were thankful for the insane Brooklyn crowd, promising that they’ll be back soon. Even an hour and a half wasn’t enough for the die hard Biffy fans that packed inside Warsaw Tuesday night. Everyone in the venue was on their feet, everyone was singing along and dancing with each other. It was the best way to throw a party on a Tuesday night. Long live Biffy!