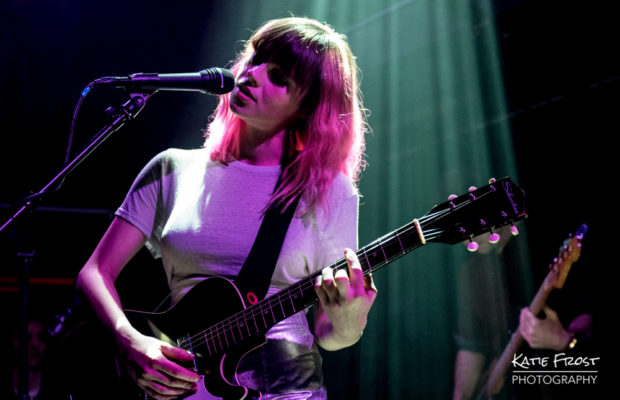 British singer-songwriter Gabrielle Aplin played the last of three sold-out shows on a mini-tour of the UK at London’s Jazz Cafe on Thursday night. When she played in London last year was at the 2,300-capacity O2 Forum in Kentish Town, so to see her play to just 450 people at the recently-refurbished Jazz Cafe was a real treat!

I first discovered Gabrielle Aplin when I saw her play live at the ‘HMV Next Big Thing’ at The Borderline in London back in 2011, and have watched her play to steadily growing crowds over the past six years.

She began her music career uploading covers to her YouTube channel, and in 2010 she released her debut ‘Acoustic’ EP on her own record label Never Fade Records. She went on to release two more EPs (‘Never Fade’ in 2011 and ‘Home’ in 2012) under her own label before signing to Parlophone Records in early 2012. Later that year she gained mainstream attention when her cover of Frankie Goes To Hollywood’s ‘The Power Of Love’ was used in the John Lewis Christmas advert. Going from strength to strength, she released her debut full-length album ‘English Rain’ in May 2013 to rave reviews. Her success continued as her second album ‘Light Up The Dark’ was released through Parlaphone in September 2015, including the infectiously up-beat ‘Sweet Nothing’.

At the end of last year Gabrielle returned to Never Fade Records and released her four-track ‘Miss You’ EP, with the title track showing a slightly more synth-based sound. The change of label and slightly new musical direction doesn’t seem to have deterred any of her long-term fans as they queued around the block waiting for the doors to open on a chilly Thursday night.

Opening with ‘Light Up The Dark’, a happy and confident Gabrielle sprung onto the stage to a huge cheer from the crowd. She went on to play a mammoth 15-track set that featuring tracks from both of her full-length studio albums, as well another track from her ‘Miss You’ EP – ‘Night Bus’. This and ‘Miss You’ slotted perfectly into her exiting body of work. It is always great to see her play ‘Panic Cord’, which is one of the tracks I saw her play at that very first show back in 2011.

This mini-tour saw Gabrielle play in all of her home-towns (places she has previously or currently lives) – Brighton, Bath and London, and in this vein she ended the show with one of her most popular tracks ‘Home’ and the whole room sang along.

Support came from Sonny, who recently signed to Gabrielle’s label Never Fade Records. The seventeen year-old singer-songwriter from South Shields played tracks from his debut five-track EP ‘Hopeless Romance’ (out on 24 March), including his debut single ‘Princess’. One of the stand-out tracks for me was ‘Jodie’ which is incredibly catchy and proved popular with the crowd. It was clear to see that Sonny was having the time of his life playing these songs that he has worked so hard to perfect, and his excitement and happiness was infectious.

Gabrielle will be playing Live At Leeds Festival on 29 April, and be sure to check out her record label’s monthly acoustic showcase nights ‘Never Fade Sessions’ at The Social in London – more info here: http://neverfaderecords.com/never-fade-sessions/