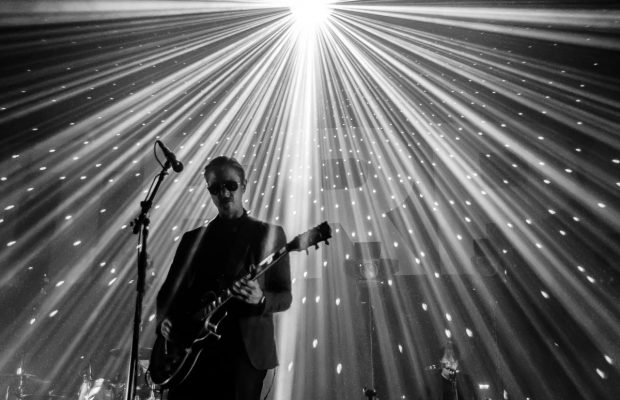 Photos and words by: Emily May

Louisville, KY’s newest music venue has been bringing some great bands to the city since opening.  On the evening of August 8th, post-punk/indie rock band Interpol performed to a packed venue of excited fans who were ready to rock out to the band whose career has spanned just over two decades.  With six studio albums under their belt, the band had a nice selection of songs on their set list this evening.  Performing a 19 song set, the band started things off with “Pioneer To The Falls” and, in addition to some older tracks, performed plenty of songs from their latest album Marauder including “”If You Really Love Nothing”, “Complications”, “Stay In Touch” and “Flight Of Fancy”.  The stage was illuminated with soft, ambient lighting that had the band members awash in shades of red, white, green and yellow, with several parts of the set containing specks of white light dancing around the stage, like from a disco ball.  It really helped to set the mood for the evening.  The crowd was having a great time, with many fans smiling and singing along to every song.  Singer Paul Banks said very little between songs, aside from a “Thank you for coming out” and “It’s great to be here”, allowing the music to drive the show.  With each member clad in suits, and Banks in sunglasses as well, the band exuded a quiet confidence and seriousness with regards to their performance.  Ending their pre-encore set with “Slow Hands”, the band left the stage before coming back out to perform a 3 song encore that included “Untitled”, “Narc” and the final song of the evening, “Obstacle 1”.  They gave the crowd a fantastic night of music with a hefty set list of songs to please fans old and new.  New York punk band Surfbort opened the show.  With the whirlwind of fun and energy that is singer Dani Miller, the band had fun on stage and no doubt made plenty of new fans this evening if the cheers from the crowd were any indication!  They no doubt got the crowd warmed up for the evening ahead.  I later spotted Miller in the crowd rocking out to Interpol during their set.  It was a great night of music that left the crowd buzzing with energy at the end!