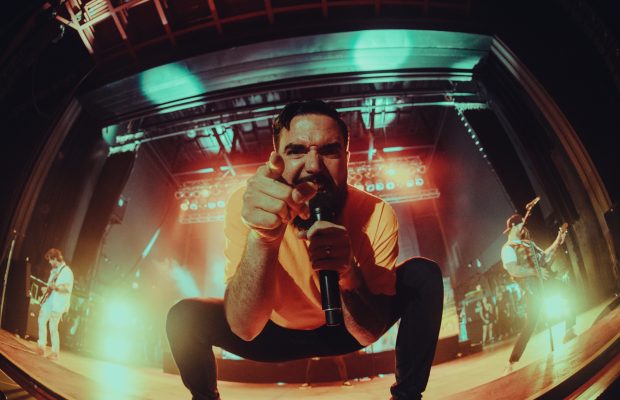 A Day To Remember with Knocked Loose and Boston Manor

A handful of years ago, I was fortunate enough to drive my landboat of a car out to Columbus, OH  to see my favorite band live for the first time ever, A Day to Remember. I remember standing in line for hours with my friends just to get a good spot in the pit, but quickly felt claustrophobic and moved back to the lawn portion of the venue. Still regard it as one of the best nights of my life, as well as the catalyst for what would later launch me into concert photography. So here I was, five years later, back at the exact same venue, at their sold out tour kickoff show for the “Raising Hell in the Heartland” tour; camera in hand, and full of excitement.

UK based hard rockers Boston Manor started off the night with an electrifying and pulsating performance; so much so that when Knocked Loose came out, they wanted the crowd to stay on that level. Not that Knocked Loose had any problems getting the crowd to move though. The Oldham county hardcore boys are still by and far one of the most insane bands to see live right now and it’s literally impossible to not want to push the person you’re standing next to while watching their set. Both bands absolutely hyped up the crowd for the main attraction, metalcore/pop punk legends ADTR!

A Day to Remember is one of those rare bands that could play literally anything off of any of their discography and the only complaint would be that the setlist wasn’t longer. The crowd waited in high anticipation for the boys to walk out on stage, and when the lights finally dimmed, all 5,200 people in attendance completely lost their minds as the band came out and opened with “2nd Sucks”. Aside from playing the usual setlist hits “The Plot to Bomb the Panhandle”, and “All I Want”, the band also broke out some old hits like “Better Off This Way” and, even better, “Sticks and Bricks”. Jeremy McKinnon’s voice switched smoothly between clean and unclean vocals, and sounded as good as ever, even on the softer tracks like “Have Faith In Me” and “If It Means A Lot to You”. They closed out with the evening with “The Downfall Of Us All”, leaving the crowd happy, nostalgic, and probably exhausted (in the best ways of course).

If you asked most millenials what band got them started on metalcore they’d probably answer “A Day to Remember”, and for good reason. This band has been around for 16 years, has had 6 studio albums, multiple sold out tours, two gold certified albums, and have somehow managed to get bigger even without having released an album in 3 years. Honestly, this band could stop releasing albums and just tour for the rest of their careers on what they’ve already written and probably still sell out bigger and better venues every tour. Their music has aged like fine wine and belongs up in the ranks with Fall Out Boy, Panic! At the Disco, and My Chemical Romance. Whether it be your first time, or your millionth time, definitely check out this tour package if you find them coming to a city near you because they are, indeed, raising hell this summer.