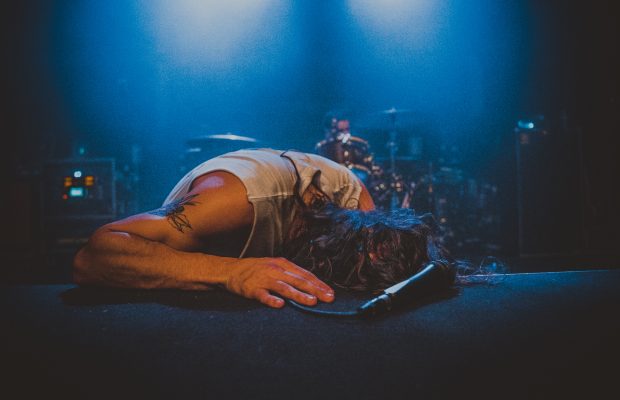 Words and Photos by Mike Thomas

The Vogue Theatre was treated to a special opening act last month. While opening for August Burns Red on the Constellations Tour, Silent Planet ushered in the night, and lets just say, I was left in pure amazement. The Los Angeles based metal core band that began their musical adventures in 2009 through a regimented life dedicated to touring the US, and just living the dream. Although they were slow to make any noteworthy progress, Silent Planet have become established in the metalcore community. Silent Planet rise to prominence over the last few years is largely due in part to not only their musical creativity, but their intellectual influences. You see, Silent Planet are not your typical grunge kids who had a dream, Garrett Russell (lead vocals) has his masters in Psychology, and while this does not directly translate to his writing, Russel’s ability to connect with hurting individuals who attend his shows, show us where is intellectual prowess shines. Russel communicates with compassion and love and while taking the opening slot of the Constellations Tour, Silent Planet showed their eagerness to be on stage.

Being a pop-punk lover at heart, I found myself reserved at first — guttural screams aren’t exactly my cup of tea! However, as I exited the photo pit I immediately checked my camera gear with the venue and made my way for the mosh pit for the last five songs of Silent Planet’s setlist. I felt like I was part of a community, united by the music. Although it is unclear the next time Silent Planet will be making their way through the Pacific Northwest, one thing is clear: I will be eagerly awaiting for their return.