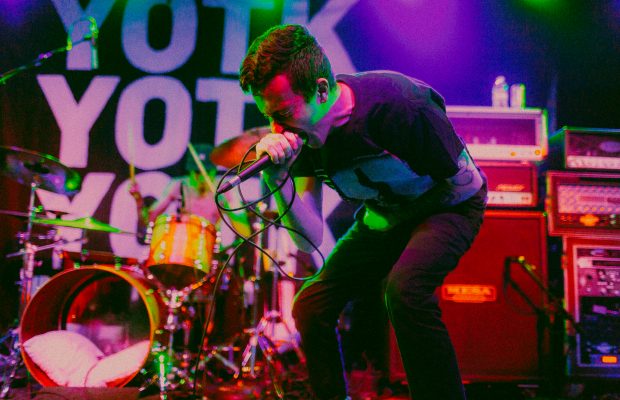 With the fall of the Vans Warped Tour, we have seen a rise in stacked tour lineups as of late, and this one seems like tour of the summer. The Pure Noise Tour features newer additions to the label along with Pure Noise veterans of many years, but regardless of how long any of the bands have been on the label, it is definitely clear that they belong.

A large crowd showed up early on a Thursday night to Bottom Lounge, an intimate bar and venue in Chicago, to make sure they caught sets from Year of the Knife and Sanction. Year of the Knife, hailing from Delaware, kicked off the night with a bang. With the release of Ultimate Aggression back in February, they kicked it up a notch in their sound, and it showed with the number of kids who turned out to see them perform. Vocalist Tyler Mullen lets out any aggression he has with his vocals, and you can see it in the way he contorts and screams and moves at a thousand miles an hour. Between his energy and that of bassist Madi Watkins, who has no problem whipping around while still hitting her every note, the fiery liveliness of Year of the Knife is unparalleled.

Following their set, Long Island hardcore outfit Sanction showed their stuff and definitely gained new fans in doing so. With their album Broken in Refraction (released July 26), the band did not hold back anything. With riffs that sound like paranoid echoes and drum beats that you can feel in your bones, vicious, sharp vocals in every song, and a stage presence that is unparalleled, Sanction is everything hardcore is looking for in 2019.

By the end of Sanction’s set, the room was the rest of the way full, with quite a crowd ready to see Los Angeles hardcore veterans, Terror. Vocalist Scott Vogel had no problem getting on stage and telling the crowd to move up to get up close and personal for their set. By halfway through the set, Vogel was calling for more crowdsurfers – saying he loved Chicago, loved keeping fans safe, and loved having a good time, and going along with all that, “this is the weakest set we’ve ever had. Security is here to keep you safe, come on up here.”

Following Terror were headliners Counterparts and Stick To Your Guns. For Counterparts’ set, the band walked out to a clip from a Brooklyn’s Cuzo YouTube video, with vocalist Brendan Murphy reciting every word, just as funny in real life as he is on Twitter. “COUNTERPARTS905,” yelled Murphy before the band broke into their hit song “Monument.” Clearly their song choice sat well with fans, as angry, blunt lyrics like “put a fucking bullet in my head,” echoed through the room and crowdsurfers crashed like waves over the barricade.

“We just finished playing four months in Europe, and let me tell ya – it’s nice to play a good show for once,” said Murphy a few songs in – “haha, it’s a joke, you guys can laugh.” His quick and feisty jokes versus his melancholy and somber lyrics are the ultimate juxtaposition, and the crowd loves both sides. Laughing at stage banter from a minute before, the crowd would just as easily go back to pitting and crowd-killing and jumping on top of one another in the blink of an eye. The band played a nice variety of songs ranging from their newer releases like Private Room and You’re Not You Anymore, all the way back to The Current Will Carry Us. They closed out their set with “The Disconnect,” to the elation of their crowd – “whoa, what a surprise, ‘The Disconnect’ is last,” said Murphy, before jumping into the lyrics. The crowd’s voices rang throughout the room the entirety of the song as they belted out every word.

After Counterparts finished, the crowd had a pretty small break to cool off and settle down before going back for round five – Stick To Your Guns. As the Los Angeles quintet made their way onstage, the crowd abruptly broke out into screaming cheers. The band played a whopping thirteen songs, hitting every album from Comes From The Heart through True View. Kicking off their set with “Nobody,” they had no problem riling up the crowd. Moshing, finger-pointing, and yelling every word proceeded for every single song without fail. Vocalist Jesse Barnett also did not hesitate to use his voice in every way he saw fit – which means speaking for those who don’t have a voice. Barnett in between songs touched on our struggles with injustice as a country. He spoke on everything from our issues with ICE and children being held in cages at our country’s border to the way we as people are forced into giving into an outdated, unfair class system. “We are overworked, we are overwhelmed, and we are underpaid, and I am tired of hearing from the 1% about how we need to stop complaining and earn what we want. Don’t get me wrong, I am not anti-education, I think going to school is important and great, but in the words of Assata Shakur, ‘No one is going to give you the education you need to overthrow them.'” He then explained to the crowd that Haymarket Books had a booth set up near the merch tables with books made to educate and equip everyone with the knowledge necessary to try to fix the problems with our country. The band continued with their set, playing a handful of songs off their album Diamond, and then dedicated “Against Them All” “to our brothers and sisters in Puerto Rico,” and then gave their all to the song. Finally, the band played an encore song, “This Is More,” which dates back to 2008, and that they very rarely perform. To say Stick To Your Guns has stood the test of time as a band is one thing, but they definitely showed it with the amount of outpouring energy the crowd gave to every song they performed, even one that dates back eleven years.

Needless to say, the 2019 Pure Noise Tour was one for the books. It will be interesting to see if the tour continues to happen yearly, and if it does – who they will select to be on it.