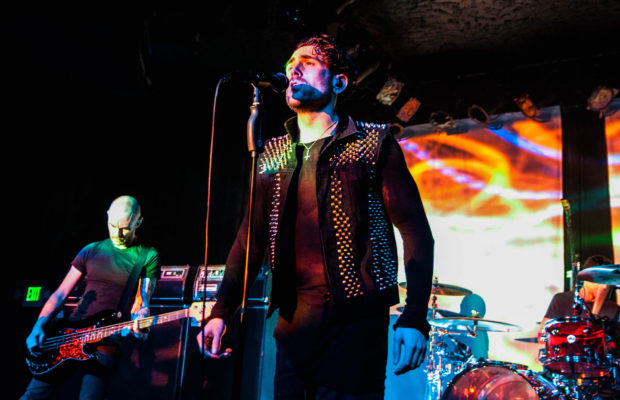 Fans were definitely in for an unforgettable night when AFI came touring through Seattle last week. As a show that sold out quickly, The Showbox was packed from the front of the crowd to the two bars in back, a sea of people appearing everywhere you looked.

Opening up the night were bands Souvenirs and The Chain Gang of 1974. Hailing from California, rock-band Souvenirs brought their well-written and widely well received songs to the Seattle crowd, performing both old favorites and tracks off of their latest album, Posture of Apology, that was released on January 20th. With a musical style reminiscent of Turnover, Souvenirs put on a great performance and really set the tone for the rest of the night.

Next up was The Chain Gang of 1974, a trendy-pop band from Los Angeles that has been making waves over the past year. While their musical style didn’t exactly fit in with that of AFI, the band managed to put on a high energy performance that got even the most skeptical in the crowd tapping their feet by the end. Frontman Kamtin Mohager not only has a distinct voice that separates them from other bands in the genre, but his energy and passion on stage captivated the crowd and caught the attention of everyone in the room. Playing tracks including their latest single “Slow” and closing out the night with “I Still Wonder,” their most catchy song to date, The Chain Gang of 1974 had something to prove to the audience that night and managed to do so with their well-written upbeat songs and energetic stage presence.

Kicking off their set with “The Leaving Song Pt. II,” off of their 2003 album, Sing the Sorrow, it was clear the members of AFI were determined to make the night as memorable as possible for their fans. While their latest album, The Blood Album, was released less than two weeks ago, the band found a balance of old songs and new tracks on their set list, pleasing both new and old fans who were in attendance.

Each member of AFI brought it their all on stage, vocalist Davey Havok constantly moving throughout the night and engaging with as many members of the crowd as possible. From the right stage, to the left to the center and even back in the bar, the members of AFI were determined to interact with as many as possible and definitely managed to do so. This inclusion made the night feel more like a family affair, AFI making the fans part of their performance, no matter if they were seeing them for the first time or had been listening to them since the release of 1995’s Answer That and Stay Fashionable.

Performing eighteen songs that touched on almost all of AFI’s releases over the years, they closed the night with two encores that included The Cure cover of “The Hanging Garden,” their most famous track to date “Miss Murder,” and “Morningstar,” off of 2000’s The Art of Drowning.

Mixing together AFI’s fan-pleasing set list, incredible stage presence, and near perfect musical performance, AFI proved once again that even though they got their start way back in 1995, they are capable of putting on a performance no one will forget.