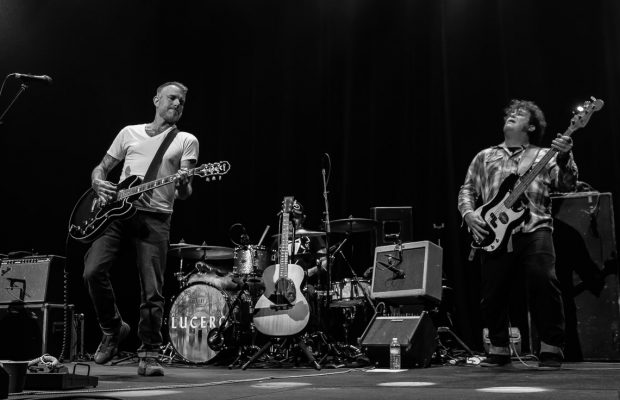 Memphis-based country-punk/rock band Lucero has been cultivating a loyal fanbase over the past 20+ years as a band and performed recently to a packed house in Louisville, KY.  The band has been touring in support of their latest album Among The Ghosts.  Performing one of the first shows in the newly opened Louisville venue, the band’s live shows may not be a rowdy as they were in the early days, but they are equally as impressive.  Singing in his familiar country twang, Ben Nichols had the crowd singing along to songs old and new, with classic hits such as “All These Love Songs” and “Slow Dancing” and newer songs such as the title track from their new album.  Chatting a bit with the crowd between songs, Nichols and his bandmates were having a great time on stage and interacting with the audience.  Several songs into the set, Nichols mentioned that he had run into an 11-year-old boy in a bar earlier in the day and that he had requested that the band sing their hit “Sweet Little Thing”.  He then joked that if you run into an 11-year-old in a bar, you’d better listen to what they have to say, eliciting a laugh from the audience before launching into the song.  They put on a great show and proved why they have been a fan favorite throughout the course of their career. Alt country/rock singer-songwriter Lydia Loveless opened the show.