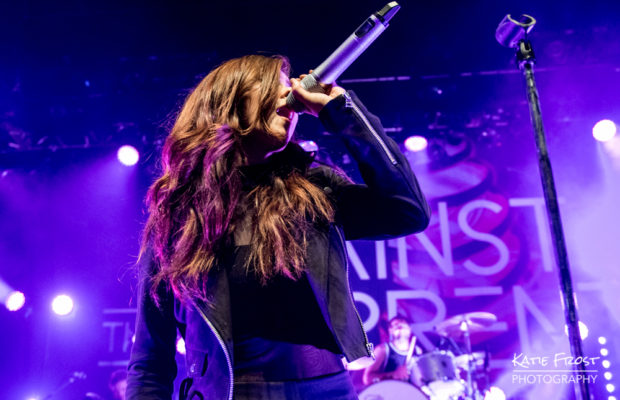 I was lucky enough to see New York pop-rock trio Against The Current play their debut London headline show at 300-capacity Soho venue The Borderline in December 2014. It is a testament to the band’s hard work that less than two years later they filled (and very almost sold out) the 2000-capacity O2 Shepherds Bush Empire, making it their largest UK headline show to date.

Beach Weather did a great job warming up the packed London crowd with their upbeat guitar rock.

Then it was punk-jumps a-plenty as Brighton-based pop-punk band As It is rocked the crowd. Although they were main support, the band put on a headline-worthy performance, with Patty Walters working the crowd to perfection.

Opening with Runaway, Against The Current played a high-energy set including tracks from their recently-released debut album In Our Bones, together with tracks from their Gravity and Infinity Eps and their cover of Teenagers by My Chemical Romance. Front-woman Chrissy Constanza was full of energy; running and bouncing around the stage.

They slowed it down to play Infinity and In Our Bones acoustically, before ramping up the energy back up to play a further four tracks. Unfortunately they had to omit Brighter from their set sue to concerns over Chrissy’s voice [and went on to postpone their show at Asylum in Birmingham] but she did not let it get her down and continued to wow the audience.

They ended their impressive set with crowd-favourite Gravity as they showered the packed venue with confetti. The band now head to Europe to complete the next leg of their In Our Bones tour.