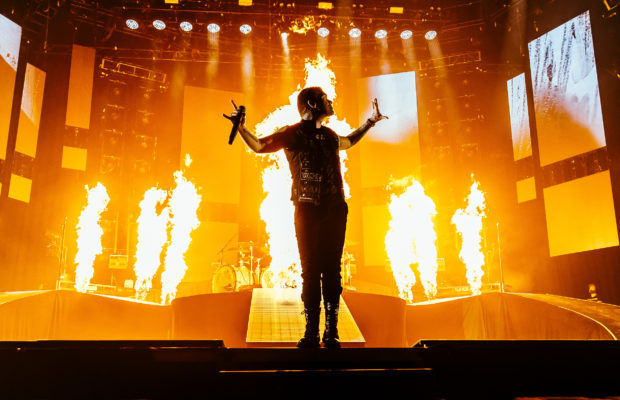 When Papa Roach and Shinedown announced that they will play the Covelli Centre in Youngstown, tickets sold out immediately. Fans from all over Ohio and Pennsylvania traveled  to see this show.

Opening up the night were Asking Alexandria and they did an amazing job getting the crowd warmed up for Papa Roach, who were up next.

Papa Roach came on stage at 7:45pm  and started their fantastic set with their hit single Last Resort, and the crowd went wild in excitement. Frontman Jacoby Shaddix was amazed by how enthusiastic the crowd was and mentioned that if “the crowd gives back to us, we go to the next level”. And they certainly did, playing songs from a variety of their albums. About halfway through their set Shaddix paid a little visit to people sitting in the lower level seats and on the general admission floor, walking through the audience, shaking hands.

Their song American Dream was dedicated to the military serving our country. After 15 songs they left the stage, leaving fans more than satisfied and I am sure they gained many fans, who initially came to see Shinedown.

At 9:30pm Shinedown came on stage to the roaring sound of fans cheering and screaming. Their set included 5 tracks off their latest album Attention! Attention!, which was released last year. They kicked the show off with Devil and some nice pyro effects. The crowd sang along to every word. Singer Brent Smith said this was ‘the best Tuesday crowd, despite the snow and you guys sold the building completely out. It feels like it’s a Saturday!” and I have to agree with him. The energy in the room was unbelievable. During “Enemies” Smith shook hands with every security guard and photographer in the pit thanking them. Never in my many years have I seen a bad do this, and it was highly appreciated.

Halfway through the set, the band made their way to the front of the catwalk into the audience, where they performed 6 songs. During one of them, a couple got engaged right by the catwalk. Aaron asked Jacky to be his wife and she said yes, in front of 8.000 concert-goers. What a memorable moment for everyone at the Covelli Centre.

They returned for 3 more songs on the main stage before ending the night with Brilliant, off the Attention! Attention! album.