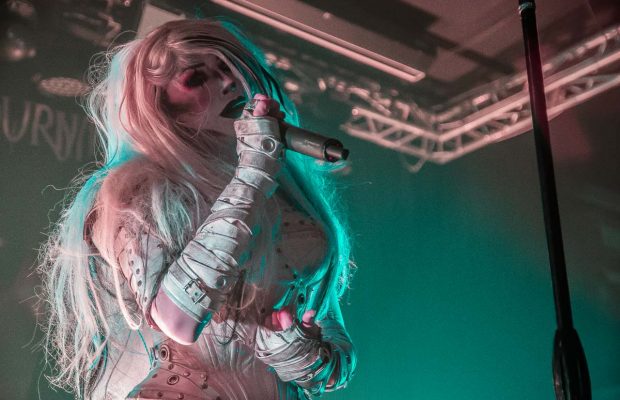 September Mourning with Call Me Monster and Mass Asylum

Hard Rock band September Mourning, who is in the midst of touring, made a stop recently in Louisville, KY.  The band’s concept is based on the fictional human-grim reaper hybrid named September (singer Emily Lazar) whose empathy allows her to give some humans a second chance.  The band’s live show is centered around the comic books that tell this story, with the live show broken up into segments.  As the lights dimmed, signaling the start of the show, a projector screen placed towards the back of the stage showed clips of the comic with dialogue, telling the story to the audience in conjunction with the band’s live performance.  The venue was packed with passionate fans who were singing along to every song, transfixed by Lazar’s performance, along with that of Rich Juzwick (guitar/vocals), Patrick Romanelli (guitar/vocals) and Kyle Mayer (drums).  Clad in costumes to round out their performance, Lazar wore an intricate white leather leotard of sorts, strips of leather wrapped around her arms, a long white wig, make up, white stockings and white boots,  while Romanelli and Juzwick wore long cloak-like coats and make up.  Starting things off with “Eye Of The Storm”, the band performed a variety of songs that included “Skin and Bones”, “Unholy”, “Angels To Dust”, “Children Of Fate” and “Empire”, along with a cover of “Stand By Me” and a drum solo.   The band was very interactive with the audience throughout their set, with Lazar spending a great deal of time standing and kneeling on a short platform at the front edge of the stage.  Fog and multi-colored lights set the mood of each song and helped to navigate the feel of the story of September and her journey in the scenes the audience was being shown.  The band ended their set with “20 Below” before coming back out for one more song, ending the show with “Before The Fall”.  September Mourning love their fans and hung out at the merch table after the show.  Local metal band Mass asylum and local hard rock band Call Me Monster opened the show.