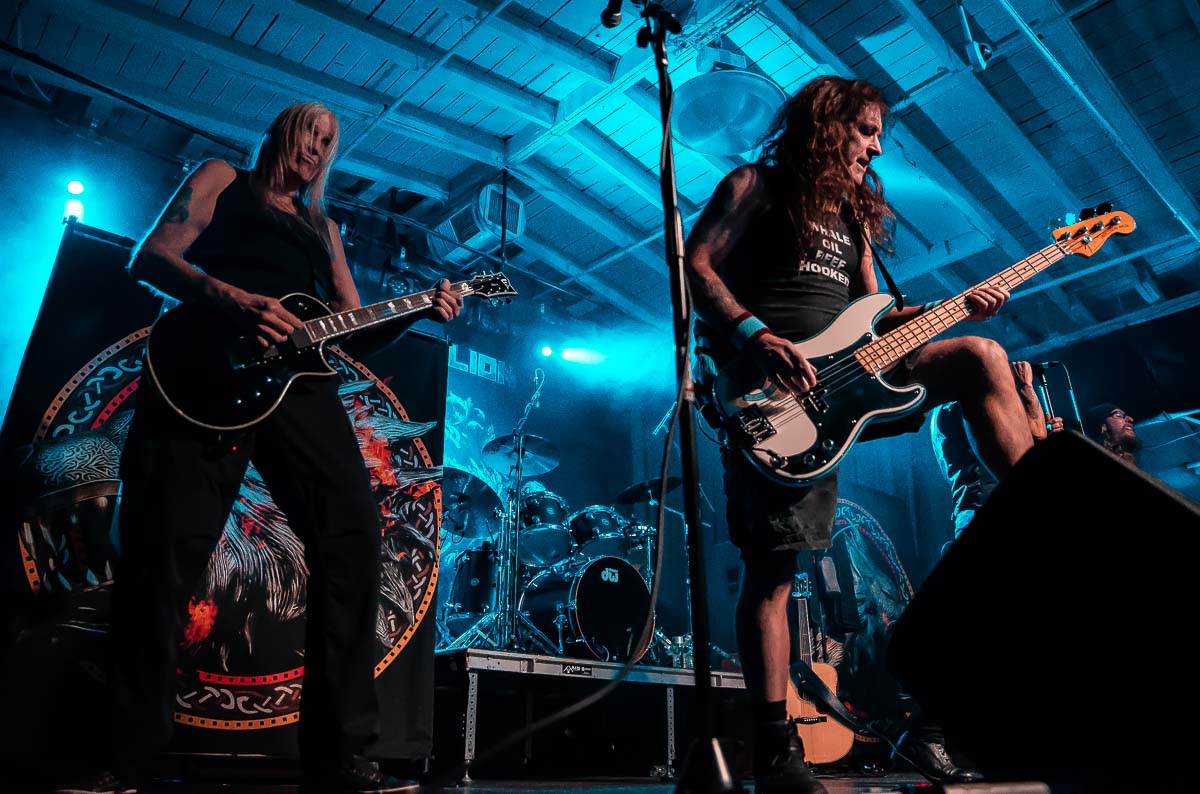 British Lion with The Picturebooks and Wyld Ryde

Many metal fans know of Steve Harris as the bass player for iconic metal band Iron Maiden, but his other band British Lion brought the rock to Lexington, KY recently on their first ever US tour!  Although not sold-out, the venue was filled with a sizable number of fans of the band who were ready for a fun night of rock, with a long line having formed before doors of fans waiting to enter the venue.  Manchester Music Hall is a great mid-sized venue, having been converted from an old warehouse into a modern venue that was the perfect setting for the evening.  Opening the show was Louisville, KY band Wyld Ryde who put on a fun and high energy set.  This was the band’s debut performance and they were having a great time on stage and with the crowd, thanking everyone for getting there early to check out their set!  With his long hair, red bandana and tinted glasses, lead singer/guitarist Chief was the picture of a rock and roll singer.  He and guitarist/vocalist Tommy Blitz and bassist/vocalist Mick Watkins interacted with each other and the crowd throughout their set, with Michael Kidd manning the drums, getting the crowd warmed up for the evening ahead.

Up next was German Alternative rock/blues duo The Picturebooks.  Comprised of vocalist/guitarist Fynn Claus Grabke and drummer Philipp Mirtschink, the duo had a gritty, bluesy/rock sound that quickly wowed the audience.  Grabke was at ease on stage, moving often across the stage and chatting and interacting with the crowd between songs.  He and Mirtschink seemed more like best friends then just bandmates, joking with each other and performing in sync for an incredible live performance.  The band has had a grueling tour schedule over the past couple of years, having played around 350 shows, and seemed at home on stage, giving the crowd an amazing and passionate live performance.  Having been personally chosen by British Lion to join them on tour, Grabke told the crowd how much they appreciated being on this tour and how they would be back soon, embarking on their next tour in April/May with Volbeat and Clutch!

Finally, the moment that many in the crowd had been anxiously awaiting for arrived.  As British Lion walked out on stage, they were greeted with thunderous cheers and applause!  Singer Richard Taylor has a commanding stage presence, and the passion and emotion with which he sings is visible on his face.  Feeling the music through dancing across the stage and expressive hand gestures, he made an instant connection with the audience who were singing along to every song.  The band released their new album The Burning shortly before heading out on tour, with Taylor telling the crowd that they were going to play some new songs, as well as older ones from the first album, thanking the crowd for making them feel so welcome.  Starting things off with “This Is My God”, the band performed a nice variety of older songs including “Judas”, “The Chosen Ones” and “These Are The Hands”, as well as plenty of new songs such as “Spit Fire”, “Legend”, “Father Lucifer”, “The Burning” and “City Of Fallen Angels”.  Bassist Steve Harris was full of energy throughout the set, constantly moving from one side of the stage to the other, seeking to interact with as many fans as possible.  Spending much of the set at the front of the stage, smiling, singing and playing directly to the audience, the crowd was clearly having a great time.  With plenty of fans in Iron Maiden shirts in attendance, being so close to one of their musical idols was no doubt an amazing experience!  Guitarists David Hawkins and Grahame Leslie added to the fun on stage, interacting often with each other, Harris and Taylor, with the four of them leading a willing crowd in plenty of sing-alongs.  Simon Dawson displayed his impressive drumming skills behind the drum kit!

Taylor chatted a bit with the crowd between songs, telling them that although the members were from all over, they considered themselves a London band.  He went onto to say that all of their songs were based on true stories, some good and some bad.  Towards the end of the set, he said that the band would normally leave the stage and come back out for their encore but were just going to stay on stage and play more songs.  He went onto say that there was a link on everyone’s tickets this evening for the new album, expressing the band’s gratitude that the new album had hit #1 on the British charts and was doing well in the US too, thanks to the wonderful fans.  He said the guys in the band had all been friends since the ’90s and that it took a while to get the band going, but they were a solid band now.  Starting their encore off with “A World Without Heaven”, which Taylor said was the first song they ever wrote as a band, they ended the show with “Eyes Of The Young”.  The fans were left buzzing from the amazing show as they headed to the merch tables to buy merch and speak with the members of the opening bands.  Although I left soon after the show ended, I later heard that Steve Harris had come out for an informal “meet and greet” with the fans, an experience I am sad to have missed!  It was a really fun night and a great first tour for British Lion.  Hopefully they will back soon to play some more shows for their American fans!