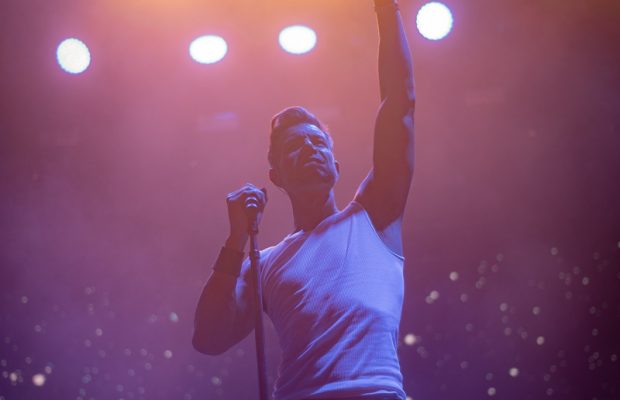 The lawn of the White Oak Music Hall is has been Houston’s hottest spot for all the best summer concerts. Complete with food trucks and craft cocktails to help you beat the Texas summer heat. I’ve been spending a lot of time there this summer working on my tans and seeing some great performances. It’s been a summer of expanding my horizon and music taste. I was only excited for the co-headlining tour of 311 & Dirty Heads because I’m a huge fan of opening act DREAMERS. They’re currently one of my favorite bands and they actually play a big part in my reemergence into the music scene. I wasn’t too thrilled about the other acts, because of a.) I had never heard of them or b.) I wasn’t too interested that type of music. After seeing them live I can now say I’ve heard of them and this might be my type of music.

In the late afternoon, the doors cleverly opened up right at 4:20 a good amount of people were already outside soaking up some rays on the lawn and ready for the fun time. Opening the show we had Bikini Trills, whose name I believe is a play on Bikini Kill, but I’m not sure. The surf-pop band has a beautiful space aesthetic. They played a relaxing set. They had some pretty sick merch. I went home and checked out their latest EP Nah, Pull Over which is now really made its way into my daily playlist.

Following were my favorite boys in DREAMERS. I was surprised to see DREAMERS on this line-up originally, but the more I thought about it the more I realized that you can’t really pin-down DREAMERS into a single genera. They can work with supporting or headlining with any type of band. I spoke a little bit about this with lead guitarist and vocalist Nick Wold in an interview that will be out next week. I was really excited to see how they would really flow with the other acts of the day and my theory checks out. This is the first time I’ve seen the band since their sophomore album LAUNCH FLY LAND released a few months ago. Opening with “SCREWS” they did a pretty good job with only a 6-song setlist mixing in a bit from each other EPs and albums. They closed out with “Die Happy” which has been one of my songs of the summer. I cannot wait to see them headline again with this new album. There are so many good songs on LAUNCH FLY LAND that I need to hear live.

Next was The Interrupters. The Interrupters took a 30-minute set and owned the stage. The California ska-punk band were a lot of fun on stage. Lead singer Aimee Interrupter (stage moniker) smiled and took time to make every person in the audience feel welcomed. During the politically charged song “Take Back the Power” she took the crowd to shake-hands and huge children. The band proudly proclaimed a strong stance against bigotry, which was met with loud applause. The Interrupters are fun high energy and amazing to see live. I should probably see more ska bands eventually, because if they’re all anything like The Interrupters you’re going to have a great time.

The first of the co-headers to take the stage was Dirty Heads. I’ve listened to very little of Dirty Heads, but I knew the singles. The stage filled with fog with the band members resting on giant pillars. It looks dangerous but very cool. Down below vocalist Jared “Dirty J” Watson and Dustin “Duddy B” Burhnell performed. The hour-long performance was fun to watch as a sunset took over the sky. The alternative reggae fusion band from Huntington Beach, California had a performance that simultaneously was laid back and high energy. An oxymoron yes, but these are facts I’m working with. The crowd was hyped throughout the show. Dirty Heads philosophy is best summed up in the hit song “Vacation” which they ended the set with. It’s about following your dreams, doing what you love, and being able to live to sweet a life. As we all stress ourselves out on the daily these a good ideas to follow. If you find it difficult to follow these idea at least you can live them viciously by listening to Dirty Heads.

As the night falls a countdown appears on the screen behind the stage. We gather around waiting for the final act of the evening. A few times there’s a hiccup and the countdown started over and fans boo, but also wait patently because once it trickles down 311 will appear to rock their faces off. I’ve always considered myself a 90s music fan. Being raised by Gen X parents you’re introduced the best of MTV before you’re five, but some how there was a disservice done and 311 totally slipped my education. Besides the hits like “All Mixed Up” and “Love Song”, I didn’t get my formal 311 schooling until seeing them on this tour. What a joy. Opening up with “Homebrew” they played several songs until later the night. The giant crowd gathering the lawn couldn’t keep their eyes off the band and neither could I. With a nothing but high-energy songs (with the exception of Amber which was played more towards the end) the band was drenched and sweat, but still kept it going. Changing my idea about stoner music for sure. The night was fun and exciting. I’m really happy I was able to make it out experience all these great performers.